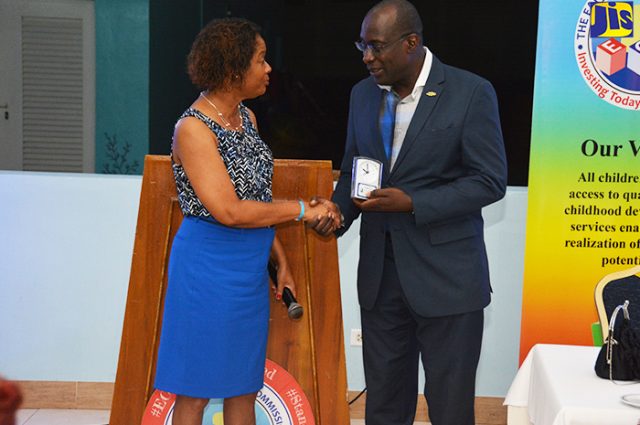 JIS: Minister of Education, Youth and Information, Senator the Hon. Ruel Reid, says the Government will be looking at bringing the emoluments of early childhood educators on par with personnel in similar positions in the Ministry.

“I know we have to take care of the financial needs and issues of those who have been doing a great job and laying the foundation in early childhood education. The good news is that as an agency of the Ministry of Education we are committed to doing so,” he pointed out.

The stipend paid to early childhood education teachers have increased by 15 per cent per year since 2014.

Senator Reid, who was addressing the closing ceremony of the Early Childhood Commission’s (ECC) four-day retreat at the Iberostar Hotel in St. James on February 9, noted the Government’s commitment to the development of the sector, as it is the foundation for all learning.

“If we can get it right at early childhood, then that is going to provide a strong foundation for a very productive and prosperous country,” he noted.

“We have to get the early childhood institutions to be fully certified…we really should insist that we operate at the highest standard. Persons who are serving at any level, much less in early childhood, should be properly trained and have their facilities in exceptional conditions,” he pointed out.

The Minister said that by promoting and maintaining certain standards, this will prevent persons from putting up an early childhood institution “at the back of their yard.”

“I am signalling that this ought not to be tolerated,” he said.

“Persons who want to start an early childhood institution, even before they get permission to start, they should meet some basic standards before they are allowed to operate,” he stressed.

Senator Reid said he is aware of the growing sentiments that Government should simply take over early childhood, considering its importance and the fact that it needs to have the necessary resources for it to function properly.

“That is a discussion that we have to have,” he said. “I am waiting for the ECC board to put together a task force to advise me as to what this is going to cost. It will be really helpful knowing what it will require to bring these institutions up to the certifiable standards and how the Government can assist them in doing so,” he said.