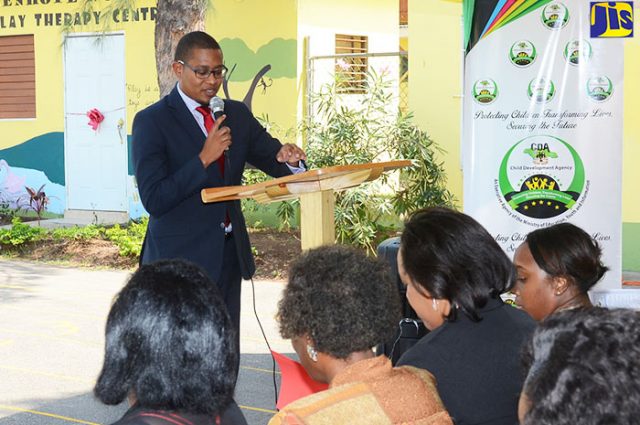 JIS: State Minister in the Ministry of Education, Youth and Information, Hon. Floyd Green, says the Government is taking a zero tolerance approach to the abuse of children.

Speaking at the opening of a play therapy room at the Glenhope Childcare Facility in Kingston on February 7, Mr. Green urged every Jamaican to become invested in the protection of the nation’s children and to report known or suspected cases of abuse.

“The Government has a role to play not only in the protection but also in the response, but every Jamaican also has a role to play. So many children live in communities where they are being abused daily and the community members know and whisper but nobody brings the information forward… as a society we must bring the information forward,” he said.

Chief Executive Officer of the Child Development Agency (CDA), Rosalee Gage-Grey, in echoing the sentiments of the State Minister, said “we believe that until we start looking out for each other, looking out for our children, then we will not curtail this ill in our society.”

The play therapy room, which is located at the nursery’s Maxfield Avenue address, will assist in the psychological treatment of children, who have been exposed to traumatic events, including abuse.

Play therapy is a form of counselling or psychotherapy that uses play to prevent or resolve psychosocial challenges. It has been found to help in social integration, growth development, emotional and trauma resolution. This form of therapy also assists in identifying abusers.

Renovation of the facility included roof repairs, installation of a window and air conditioning unit, and the provision of an assortment of toys and games.

A play therapy room has also been established at the Granville Place of Safety, Trelawny, and another room is being repurposed at the Blossom Gardens Childcare Facility in Montego Bay, St. James, which is slated to be opened in two weeks.

The project was funded by the Government and through donations from several private sector entities.

CAPTION: State Minister in the Ministry of Education, Youth and Information, Hon. Floyd Green (left), addresses the opening of a play therapy room at the Glenhope Childcare Facility in Kingston on February 7. The play therapy room will assist in the psychological treatment of children who have been exposed to traumatic events.