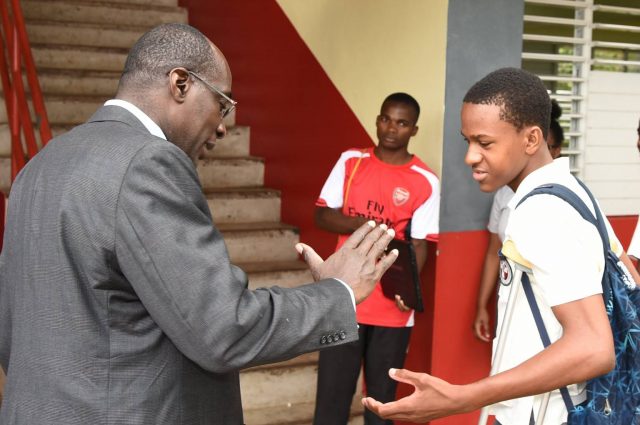 JIS: The Ministry of Education, Youth and Information will be investing $20 million in the construction of a sixth-form block at the Mount St. Joseph Catholic High School in Manchester.

The project will include classrooms, science laboratories, two visual arts rooms and space for students who are pursuing courses in engineering, auto mechanics and technical drawing.

Portfolio Minister, Senator the Hon. Ruel Reid, who toured the Mandeville-based institution recently, said the funds will be provided during the next financial year.

Mount St. Joseph, which is a grant-funded school, was opened in the 2014/15 academic year through the collaborative efforts of the Diocese of Mandeville and the Sisters of Mercy.

During the visit, the Minister signed a memorandum of understanding (MOU) with the school administration regarding the grant-aided status of the institution.

He also observed work in progress on a grade-nine block to house six classrooms and science and computer laboratories, and a playfield and sports hall. The projects are scheduled for completion by March 2018.

The overall building project is expected to ease the congestion that now exists whereby some classes are being held at the nearby Retreat House.

Senator Reid said institutions such as Mount St. Joseph can provide some of the much-needed high-school spaces across the island.

He noted that while there is excess capacity at the early-childhood and primary levels, there is a shortage of space for secondary school students.

“Ideally, we would need 100 more schools. I am trying to get 17 done in a hurry, starting with five next year,” he noted.

The number includes two new schools in Manchester, one in Mile Gully and the other in Fine Grass near Christiana, which will enable the Christiana High School to discontinue the shift system.

The Education Minister informed that talks are under way with two international donors, who are thinking of building institutions in Jamaica that will accommodate students from kindergarten up to age 18.

“With some 35,000 jobs set to come on stream at Alpart  (in St. Elizabeth) – there will be four different kinds of plants making aluminium foil, welding rods and steel – I am making the case that I am looking for institutions to train students,” Mr. Reid said.