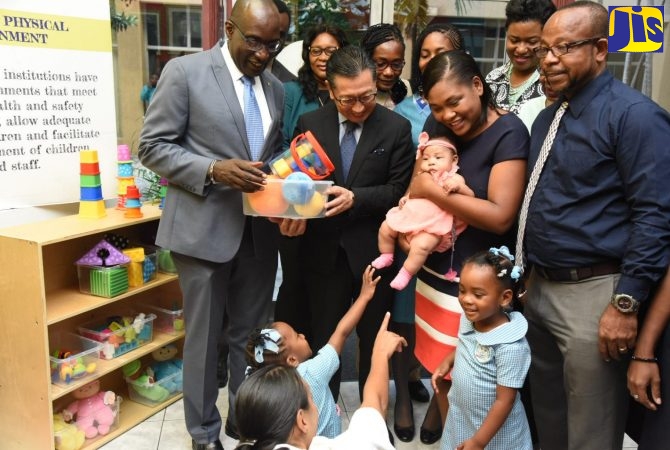 JIS: Minister of Education, Youth and Information, Senator the Hon. Ruel Reid, says the Government is working towards having 300 fully certified early-childhood institutions by 2019.

He said that the Ministry is working closely with the Early Childhood Commission (ECC) “to make this a reality”.

“We have 12 operating standards… . We are taking on infant schools, we are adding infant departments to existing primary schools, and we are asking the private early-childhood institutions to come sign a Memorandum of Understanding (MOU) to become part of the Government’s public early-childhood system,” Minister Reid said.

He was speaking at a ceremony for the presentation of stimulation resources from Japan for the Brain Builders programme at the offices of the ECC in Kingston on Wednesday (November 21).

Minister Reid said the Government recognises that early-childhood education “is the nucleus of the entire education system” and is committed to improving standards at this level.

He noted that the work of the ECC has already resulted in the certification of 134 institutions.

“I want to laud the work of the ECC. The certification and standardisation are top priorities of your programme of capacity-building,” he said.

Ten early-childhood institutions will benefit from the donation of stimulation items, which were provided at the cost of approximately US$17,000 under the Government of Japan-funded Inter-American Development Bank (IDB) Technical Cooperation Grant Programme.

Ambassador of Japan to Jamaica, His Excellency Hiromasa Yamazaki, said his county is pleased to partner with the Jamaican Government on this initiative.

“My Government holds dear, the philosophy that investing in education at the early-childhood, primary, secondary and tertiary levels are extremely vital for the overall development of the country and its people. Indeed, children are the future of every progressive country. I hope that (the institutions) will make the best use of the resources to make steady progress every day,” he said.

The Brain Builders programme, launched on July 6, is a framework for action in the first 1,000 days of a child’s life, which is from conception to age two.

Under the initiative, the ECC will be responsible for establishing 126 Brain Builders centres, with two in each constituency.

The main objective of the programme is to ensure that all Jamaican children get the best start in life by attending to their health, nutrition, stimulation, social protection, child protection and early-intervention needs.

This project forms part of efforts by the Government to achieve Sustainable Development Goals (SDG) 1, 2, 3, 4 and 16, which, respectively, relate to: no poverty; zero hunger; good health and well-being; quality education; and peace, justice and strong institutions.

CAPTION: Minister of Education, Youth and Information, Senator the Hon. Ruel Reid (left); and Ambassador of Japan to Jamaica, His Excellency Hiromasa Yamazaki (2nd left), observe as children from the Elim Early Childhood Development Centre, engage with baby Tehila Gordon, who is being held by her mother Salome Bourne-Gordon (second right). Occasion was a ceremony for the presentation of stimulation items for the Brain Builders programme at the Early Childhood Commission (ECC) in Kingston on Wednesday (November 21). At right is Tehila’s father, Talbert Gordon.

Please see the link below with the relevant information regarding JAMVAT 2021/2022.
read more