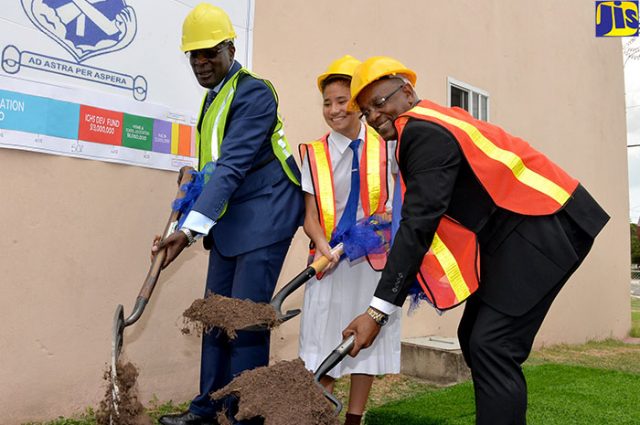 JIS: Ground was broken today (June 19) for the construction of five additional classrooms and four technology laboratories at Immaculate Conception High School (ICHS) in St Andrew, at a cost of approximately $76 million.

The project, slated for completion by early 2019, is being spearheaded by the school’s Home-School Association (HSA) and aims to provide additional space for the student population, which averages just under 1,700, as well as increase the use of technology in the school’s curriculum.

Funding is being provided through a partnership involving the Ministry and private-sector stakeholders collaborating with the HSA.

Education, Youth and Information Minister, Senator the Hon. Ruel Reid, who took part in the ceremony, said he welcomed the initiative, which he described as the school’s response to the Ministry’s call for more schools to be built and expanded to facilitate the provision of quality high-school education.

“The excellence that you have at Immaculate is what we want for all students,” the Minister said.

“We want universal access for all students… so that we have a population that is highly skilled, trained and certified. Not only will (this) add to the local productivity on the one hand, but, equally, we will be able to attract higher quality of investments into Jamaica, so that all of us can grow and prosper,” he added.

Senator Reid also lauded ICHS’s administration for its outstanding work at the institution, which, he noted, has laid the foundation for the students’ success.

“All of us are proud of your performance at this noble institution (which) has been stellar, and the Ministry wants to thank you as a school and church family for your commitment to education (and) what you have been doing in uplifting the lives of our young ladies,” he added.

Meanwhile, President of the HSA, Donovan Mayne, said the project represents the first major building development undertaken at the school in approximately 20 years.

Mr. Mayne thanked Senator Reid for committing the Ministry’s support for the undertaking, and also the various private-sector stakeholders partnering on the project. They include the NCB Foundation and Barita Investments.

Additionally, Mr Mayne expressed gratitude to the staff and students, who were instrumental in raising approximately $4 million that will go towards the project.

For her part, Principal, Sister Angella Harris, also welcomed the project’s implementation, which she said will further enhance the environment for the students’ development and their exposure to technology, thereby preparing them for substantive careers.