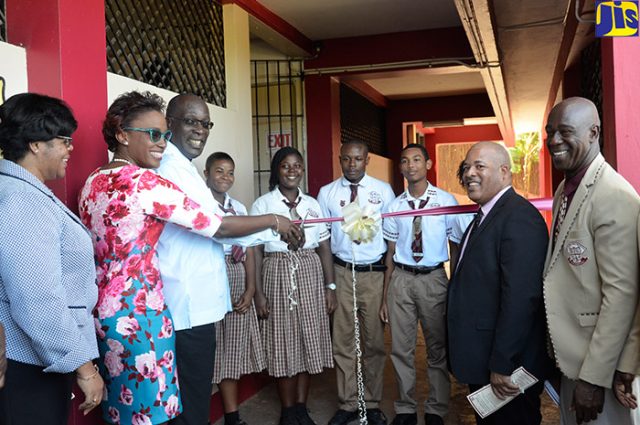 JIS: Minister of Education, Youth and Information, Senator the Hon. Ruel Reid, has announced that there were improved performances in four of the five subjects used for testing in the final sitting of the Grade Six Achievement Test (GSAT).

The overall students’ mean per cent scores for Language Arts, Communication Task, Science and Social Studies showed improvement over the previous year’s performance by one per cent, 5.5 per cent, 7.9 per cent and 1.6 per cent, respectively.

Addressing a press conference at the Ministry on Tuesday (June 5), Senator Reid said the Government of Jamaica is pleased to have on record an increase in students’ performance in these four areas, especially Communication Task.

“We have seen that, overall, there has been a positive trend in the right direction. Communication Task, which is a written component of these exams, achieved the largest percentage point increase. This is encouraging, as it shows that the students have been developing the skills of critical thinking and are able to express themselves,” the Minister said.

He added that all students who sat the GSAT in March have been placed in full secondary-level institutions.

“The Ministry, this year, has placed all students in full secondary-level institutions, an improvement over last year by one per cent. Last year, we achieved 99 per cent and this year, I said we were going to deliver and get 100 per cent… . We have,” he said.

Senator Reid offered congratulations to each student who sat GSAT. “The entire Ministry congratulates all students on their performance and wishes them continued success in pursuing their education beyond the primary level,” he said.

School administrators at the primary level are also reminded to check the results carefully and communicate any concerns/queries by Monday, June 11.