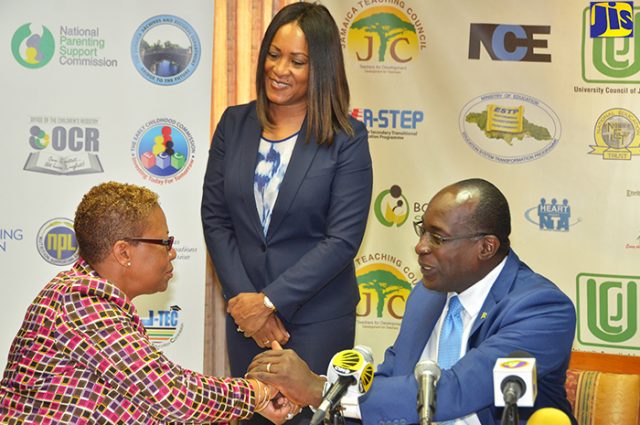 JIS: The Ministry of Education, Youth and Information is reporting that 103 schools recorded notable improvements in the Grade Six Achievement Test (GSAT) and Caribbean Secondary Education Certificate (CSEC) examinations in 2016.

This, Portfolio Minister, Senator the Hon. Ruel Reid, says, is according to the 2016 National Education Inspectorate (NEI) Report.

He was speaking at a media briefing at the Ministry’s offices in Kingston on Tuesday, March 7.

Senator Reid said the GSAT outcomes saw 64 of 85 schools visited recording improvements of between one and 42 per cent in Language Arts, while 11 had improved performances ranging from one to 41 per cent in Mathematics.

Additionally, he said, there was notable overall improved student performance in Mathematics of between two and 86 per cent at 62 of 85 primary schools.

Senator Reid disclosed that 10 of 18 high schools recorded improvements ranging between one and 21 per cent in CSEC English Language, while 12 of 18 institutions improved between two and 19 per cent in Mathematics.

Noting that the outcomes for CSEC technical and vocational subjects, which were included on the NEI’s 2016 review, were being reported on for the first time, Senator Reid said the data revealed that a small number of students sat the external examinations, adding that “an average of eight per cent of each cohort sat at least one subject, most of whom attained satisfactory passes”.

Meanwhile, the Ministry is reporting marked improvements in the operations of the 103 schools.

The Minister said 78 of the schools inspected were deemed to be performing satisfactorily in the area of leadership and management, with the remaining 25 being rated below par.

This outcome, he noted, was significant, in light of the short period between the previous and current inspection cycles, within which targeted remedial actions were scheduled, “and the fact that some of the interventions required time for implementation and for desired improvements to take place”.

In the area of teaching methodologies, Senator Reid said 34 schools received improved ratings, with 73 getting a satisfactory mark.

He attributed this to improvements in student support at the schools as well as the institutions’ leadership and management.

CAPTION: Minister of Education, Youth and Information, Senator the Hon. Ruel Reid (right), greets Chief Inspector at the National Inspectorate, Maureen Dwyer (centre), while Public Relations and Communication Officer at the Ministry, Sheryl Bromfield, looks on. Occasion is a press conference on Tuesday (March 7), at the Ministry in Kingston to provide details about preparations for the Grade Six Achievement Test (GSAT), among other matters.

Lifelong learning includes home schooling, adult education, continuing education, work-based learning or self-directed learning. Whether you are young or old you should always improve your education. Never take it for granted that you do not need to partake in lifelong...
read more