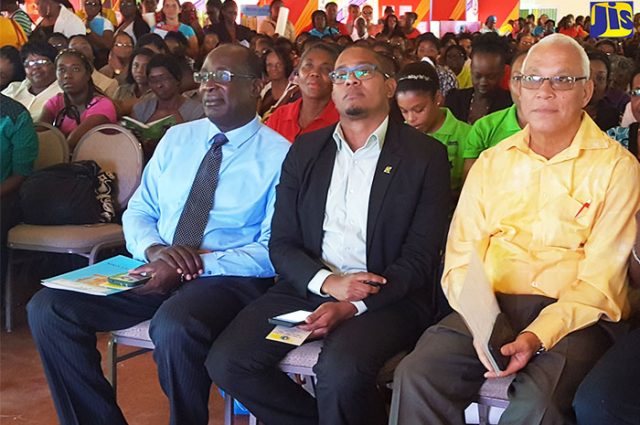 JIS: There is a 30 per cent increase in the 2017/18 budget for early-childhood institutions (ECIs), and resources are being set aside to help those institutions most urgently in need of assistance.

This was stated by Minister of Education, Youth and Information, Senator the Hon. Ruel Reid, at a meeting with members of Region Five, at Everglades Centre, in Black River, St. Elizabeth on February 17.

This was the third in the series of Early Childhood Commission (ECC) Certification fairs, aimed at getting all of the island’s infant schools to operate according to the 12 standards set by the ECC.

Senator Reid noted that in the 2016/17 fiscal year, the Ministry also budgeted $30 million to partner with the ministries of Health, and Labour and Social Security to reactivate the stimulation programme for mother and child, from birth to age three.

The Minister pointed out that there are examples of persons who informally started a basic school on their verandahs, and it is important that all stakeholders achieve the 12 standards set by the ECC in the shortest possible time.

“The objective of today’s fair is to sensitise you about what the standards are and what needs to be done. The rationalisation process is to ensure that more children have access to trained teachers in established, certified, government-operated infant departments and infant schools,” Senator Reid stressed.

There are currently 2,859 ECIs operating in Jamaica. Of that number, 2,515 have applied for certification and, to date, only 26 have achieved certification status.

Senator Reid also told the hundreds of participants at the fair that an Oversight Committee is being established to oversee the development of a comprehensive strategy to revitalise the vision for the Jamaican child from birth to eight years.

This, he said, is intended to advance the early-childhood-development sector towards internationally accepted levels.

Meanwhile, the ECC Chairman, Mrs. Trisha Williams-Singh, said the certification fairs came about as a result of listening to the needs of the practitioners and ensuring that the sector is improved and can move forward.

“I am hoping to have 100 institutions certified by August. This drive is solely to improve the standards of our early-childhood institutions. Many times we make decisions without consulting with those most affected. We are now involving the stakeholders for the benefit of our most vulnerable citizens,” she said.

How to avoid conflicts at school

Conflicting situations may arise in your classrooms. Many times there are reports of students fighting or verbally abusing others. Unfortunately, some of these situations have led to the death of some of your fellow school mates. It is always best...
read more