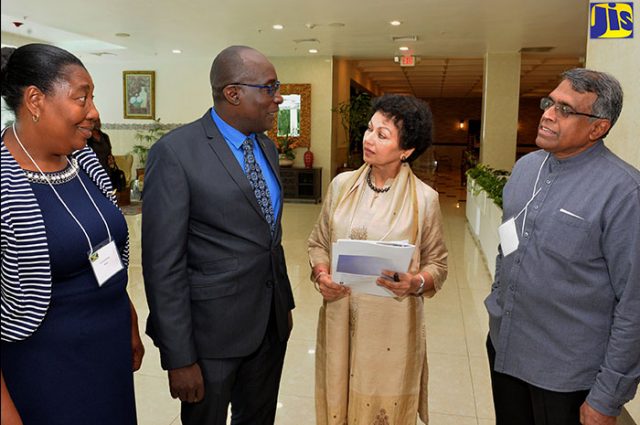 JIS: Minister of Education, Youth and Information, Senator the Hon. Ruel Reid, says infants who enrol in Brain Builder Centres will stand a better chance at acquiring National School Leaving Certificates and successfully read for their degrees at the tertiary level.

He was speaking at the Commonwealth of Learning (COL) Regional Focal Point Meeting for the Caribbean on Thursday (August 30), at The Jamaica Pegasus hotel in New Kingston.

“Those students [who start with the Brain Builders Programme] would have acquired those [cognitive] skills. They are ready to learn and they [will] read for their degrees, so I am saying it will empower,” Senator Reid said.

“By the time the child reaches age three, their whole cognitive construction would have already been far advanced… That is what I have discovered. That is what the experimenters [have] said,” the Minister added.

Senator Reid also noted that Brain Builder Centres will help students with identifying skills that they are comfortable with from the basic and primary schools, and be able to choose skill-based courses easily, which are being offered through the Career Advancement Programme (CAP).

“My mantra is to work this thing [for] every young person in Jamaica to feel that they can aspire and get to higher education. We are doing some reform in terms of higher education and … they can go to the alternative called the Career Advancement Programme (CAP). We’ll give you [students] a menu. You can do a composite or you can decide if you’re going to focus on the technical side,” he said.

The Jamaica Brain Builders Programme was launched at a cost of approximately $540 million by the Ministry, in partnership with the Early Childhood Commission (ECC) on July 6.

The objective of the programme is to reduce cognitive learning challenges among infants in the country. It is also a framework for action in the first 1,000 days of a child’s life, which starts from conception in the womb to age two years.

Under this initiative, the ECC is responsible for establishing 126 Brain Builder Centres, with two in each constituency across the island.

Meanwhile, the National School Leaving Certificate will commence in September. It will consist of a certificate with data on the performance of students over their five years of secondary education, which will take into consideration their academic achievement, co-curricular participation and behaviour.