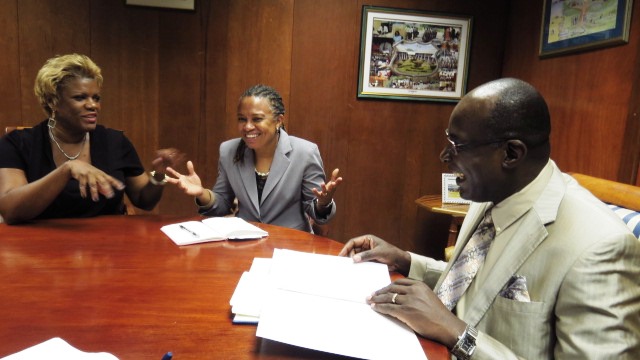 Senator Ruel Reid, Minster of Education, Youth and Information met with representatives of the Press Association of Jamaica (PAJ) during a courtesy call at his National Heroes Circle office in Kingston today (April 13). The PAJ delegation, led by President Dionne Jackson Miller, raised several issues including the facilitation of greater access by media to Cabinet Ministers; review of the Access to Information Regulations; and tabling in Parliament of the latest report by the Integrity Commission.

In response Minister Reid stated that “Cabinet had bought into the policy that we are servants of the people”. In this regard, Cabinet had adopted a communication policy that requires Ministers to be responsive to the information needs of the public. Minister Reid noted that he was the official spokesperson for the Cabinet, and that other ministers were responsible to speak on their portfolio areas. The Information Minister committed to bring to the attention of Cabinet the legislative issues raised by the PAJ.

Curriculum and Support Services arm of the Educational Services Division develops plans, organizes, directs, coordinates input, and evaluates the curriculum for the Primary and Secondary levels. In addition, the section coordinates the activities of related units by exercising overall responsibility...
read more