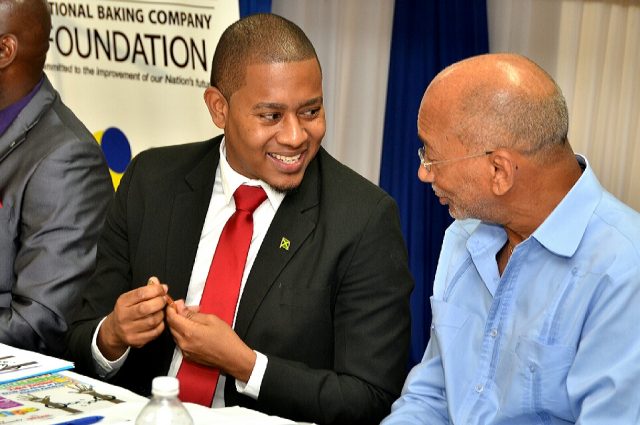 JIS: The Ministry of Education, Youth and Information is forging international partnerships to address child abuse across the island.

Speaking at the launch of Child Month, which is observed annually in May, Minister of State in the Ministry, Hon. Floyd Green, said in an effort to keep our children safe, Jamaica has been designated a ‘Pathfinder Country’, which is a ‘Global Partnership to End Violence Against Children.’

He explained that the United Nations (UN) has decided to bring together the global community to focus squarely on the issue of violence against our children.

“This is not just a Jamaica problem, but, as Jamaicans, we have put up our hands and we have said let us lead the way, and, as such, we have been designated a Pathfinder Country,” the State Minister said.

The annual Child Month activities were launched on April 6 at the GraceKennedy Offices, 73 Harbour Street, Kingston, under the theme‘Take Action! Break the Chain of Abuse against Children’.

As part of Agenda 2030, the world’s governments have set ambitious targets to end violence by 2030, in order to deliver the vision of a world where all children grow up free from violence and exploitation.

The State Minister also disclosed that in an effort to strengthen the Ananda Alert System, through the Office of the Children’s Registry (OCR) a partnership will be forged with Facebook.

On May 1, the start of Child Month, the initiative will be launched.

According to Mr. Green, when an Ananda Alert is issued for certain categories of children that go missing, it will be shared with all Jamaica Facebook users.

Meanwhile, Registrar at the OCR, Greig Smith, said the entity is committed to ensuring that the nation’s children are safe.

“A commitment to ending violence against children must be enshrined in our most basic tenets of governance,” Mr. Smith said, noting that there must be collective support.

“This requires a concerted effort from every Jamaican. The OCR, the Child Development Agency (CDA), the Office of the Children’s Advocate (OCA), the Centre for the Investigation of Sexual Offences and Child Abuse (CISOCA) and the Government cannot do it alone,” he said.

Activities for Child Month will begin with a national church service at the Fellowship Tabernacle, 2 Fairfeild Ave, Kingston, on Sunday, May 7.

On Friday, May 19, National Children’s Day, members of the NCMC, along with other stakeholders, will gather in the Half-Way Tree Transport Centre and St. William Grant Park, downtown Kingston, at 6:00 a.m. to bring cheer and hand out tokens to children on their way to school.

CAPTION: Minister of State in the Ministry of Education, Youth and Information, Hon. Floyd Green (left), converses with Patron of Child Month, Hon. Douglas Orane, at the launch of Child Month 2017 on April 6, at GraceKennedy Headquarters, downtown Kingston.

The Finance Division provides financial and accounting services to support the Ministry.  The Division provides guidance for all public educational institutions,  MoEY agencies and the Regional Offices, and manages the funds provided in the Estimates of Expenditure. The unit is...
read more