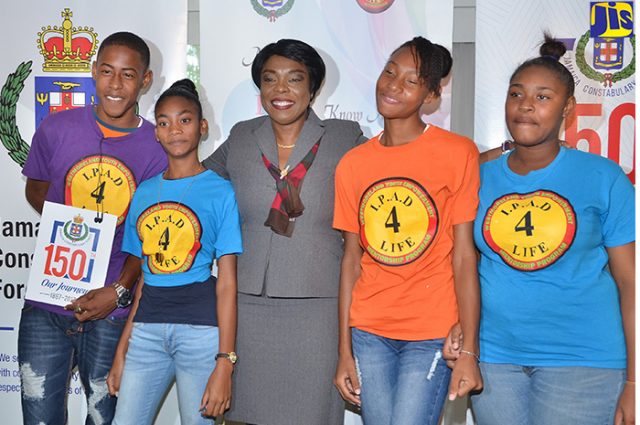 “I really feel on top of the world about it,” says Principal Clyde Evans in an interview with JIS News.

Kevin’s first- and second-place finishes in shot put and javelin, respectively, were key to the Westmoreland-based school rounding out the five-day championship in seventh place with 51 points.

“We have really performed well, and it has allowed the school to be recognised and be seen much more favourably in the public’s eye,” Mr. Evans says.

The student athlete’s exceptional performance, which was celebrated by the school, the community and friends and family, represented the unfolding of hard work, discipline, and a new sense of purpose in Kevin, who was once considered a troublesome student.

This newfound attitude is due largely to intervention through the Jamaica Constabulary Force’s (JCF) IPAD Youth Empowerment and Mentorship programme, aimed at providing social intervention for young people.

IPAD, which is an acronym for Identity, Purpose, Attitude and Destiny, was rolled out in 2015 to instil good values and discipline in students.

It seeks to help students gain respect for the law, the police and their peers, while also acquiring social and problem-solving skills.

The programme, offered through an annual summer camp, is the brainchild of Acting Commissioner of Police, Novelette Grant, and is staged annually under the theme ‘IPAD 4 Life’.

The annual camps, staged at Petersfield High, were conceptualised as an added strategy to help disrupt incidents of crime and violence in the Westmoreland police division, by targeting the youth.

So far, some 250 young people have been impacted, including participants from other schools in the community. The JCF is now looking to expand the initiative to other parishes.

“We have many successes from IPAD 4 Life through the two summer camps, so far. The youngsters have had an opportunity to be empowered. It is not about being a good or a bad child (or that they are) going to put you in boot camp to beat change into you,” the Principal says.

He notes that the programme, instead, provides the youngsters with an opportunity to hone their skills and discover their talents and abilities.

“It shows them that they are somebody, that they are worth something, that they are a valuable part of society, they have value to themselves and value to others. After two years, we have had youngsters who speak extremely well about it and look forward to the next camp (each year),” Mr. Evans adds.

The Principal told JIS News that the programme, which tied into the strictures of training for the championships, was critical in bringing out excellence in the young man.

“The end product that Jamaica and, hopefully, the world, have seen, represents a significant change in Kevin; a very pleasant change. I would say Kevin was mischievous; even though his performance on the field was always strong-willed and determined, he would sometimes have clashes with teachers,” Mr. Evans points out.

He says the young man, who aspires to a professional track and field career, has shown characteristics of being more settled and focused since participating in IPAD 4 Life.

Kevin, for his part, tells JIS News that the programme taught him the value of determining his life goals and knowing how to work towards them.

“I am very grateful, as it has helped me a lot, pushed me towards focusing academically and also was important to my performance at Champs. Every youngster has a goal in life, so you need to find your goal in life and work towards it,” he says.

Kevin won the class-one shot put with a record throw of 20.65 metres. He threw a new national junior record of 63.73 metres in the preliminaries of the boys’ javelin, but could not repeat the performance in the finals, where he was placed second with a throw of 59.15 metres. Kingston College’s Aval Denton won the event with a 59. 21-metre throw.

Kevin is hopeful that he will receive an athletic scholarship to a university to further his studies and advance his career.

Mr. Evans describes as heart-warming Kevin’s perspectives on IPAD’s impact and his focus on education and professional success.

“I am so pleased to know that coming out of IPAD 4 Life, he realises the importance of having goals and working towards them,” he said.

Acting Police Commissioner, Novelette Grant, is urging private- and public-sector entities to come on board in offering financial and physical support to increasing the range of the initiative.

At a corporate breakfast on March 29 to seek sponsorship, Mrs. Grant said additional support will serve to refine the structure of the programme; expand its reach, particularly in the western section of the island; and to provide mentorship.

CAPTION: Acting Commissioner of Police, Novelette Grant (centre) with participants of the Jamaica Constabulary Force (JCF) IPAD Youth Empowerment and Mentorship Camp programme, following a corporate breakfast on March 29 at the Terra Nova All-Suite Hotel in Kingston, which was used to seek sponsorship for the expansion of the programme. IPAD, an acronym for Identity, Purpose, Attitude, Destiny, is aimed at social intervention for youth.