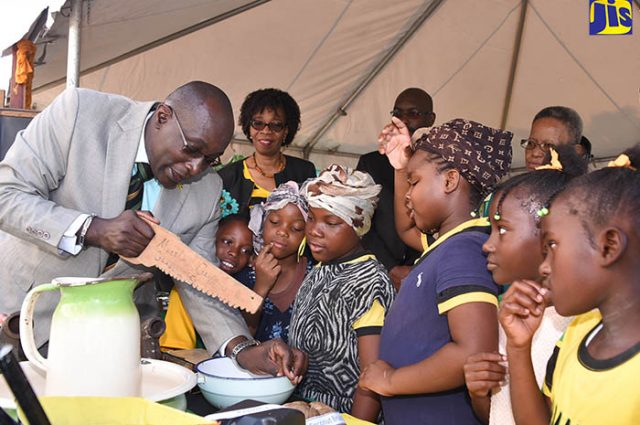 JIS: As the nation celebrated the 16th staging of Jamaica Day, at least one West Kingston educator believes in its continued relevance as a source of reinforcing the country’s heritage for future generations.

Principal of the Denham Town Primary School, Eugenie Brown believes the day’s significance, as well as its accompanying activities must be celebrated continuously.

“We want the children coming up to know about our heritage and so we do not want it (the day) to be lost any at all,” she told JIS News, at her school’s Jamaica Day celebrations, on February 23.

“The more we talk to the children about its importance, is the more they will know. The more we celebrate it, the more it will be in them. So Jamaica Day is still relevant,” she added.

The Denham Town Primary School Principal also indicated that she wanted her school to lead the charge in celebrating Jamaica’s rich heritage and culture by showing to the rest of the nation that “there are positive things happening in West Kingston as well as at Denham Town Primary”.

Ms. Brown is hoping that students and the rest of well-thinking Jamaicans will take a moment to “remember (the) ancestors” and their sacrifice for all.

“No other country has the rich culture that we have here. Our songs, music, dance, dress and sports we must keep them alive,” she said.

Activities at Denham Town Primary included: the playing of Jamaican ring games, dancing to music such as Ska, reggae and religious songs and the eating of foods and desserts such as the corn-based, asham.

Addressing students, at the school, Minister of Education, Youth and Information, Senator the Hon. Ruel Reid said they were privileged to reside in Jamaica and encouraged them to be proud of the nation’s accomplishments.

The Minister emphasised the contributions made by the National Heroes, as well as the many investments made by governments in the education system.

He further told the students that the Government is committed to building a better Jamaica, which starts with them as they are a part of “Jamaica’s possibility”.

In a February 21, 2011 proclamation for Jamaica Day, Governor General, His Excellency, the Most Hon. Sir Patrick Allen, noted that the day is critical to the development of a strong spirit of patriotism and responsible citizenship.

He explained that Jamaica Day provides an opportunity for all Jamaicans to partner with young people to help define and create the most suitable context within which Jamaicans can be the best examples of humanity.

“The time has come to enhance the profile of Jamaica Day and thus broaden national participation in the activities in order to align with national development objectives,” the Governor General said.

Jamaica Day 2018 was celebrated under the theme: ‘Celebrating Jamaica: Nurturing our culture and Natural Heritage’.

Kindly note that this unit's functions and responsibilities have been reassigned to the Early Childhood Commission.
read more