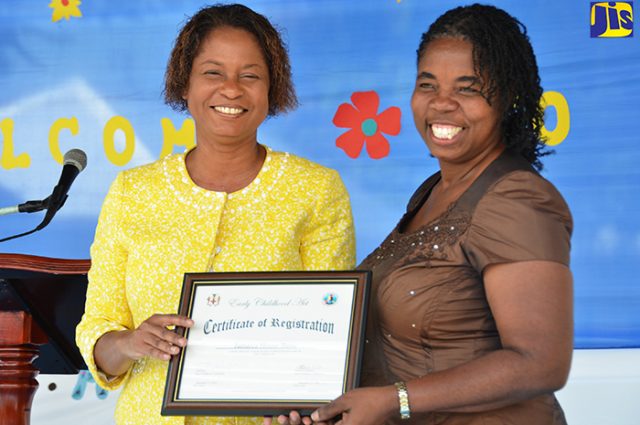 JIS: Jamaica House Basic School is the latest and first institution in Kingston and St. Andrew to be certified by the Early Childhood Commission (ECC).

This means that the institution have successfully attained the ECC’s 12 operational standards.

Approximately 300 basic schools are being targeted for certification by 2019. Earlier this year, the St. Margaret’s Bay Basic School became the first institution in Portland to be certified.

At a function at Jamaica House Basic School on Tuesday (March 7) to recognise the achievement, ECC Chairperson, Trisha Williams-Singh said the standards are not difficult or unattainable for any of the schools.

The ECC Chairperson noted that the certification of Jamaica House Basic School should send a strong signal to the other early-childhood institutions in Jamaica that they, too, can be certified.

The school’s Principal, Veronica Parkinson-Burnett, said the path to certification began in 2007 when she took over as the school’s head.

She noted that the journey was beset with challenges, but the school managed to overcome them through the support of committed parents, teachers and other stakeholders.

“The first inspection report was disheartening and I began working on the shortcomings. The second report was much better, but there was room for improvement. With all hands on deck, the school worked hard on the standards,” she said, while acknowledging the various contributors.