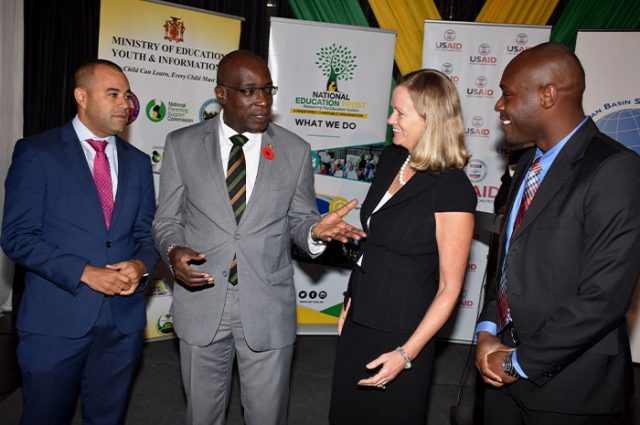 JIS: Jamaica is to benefit from a US$4-million Improved Safety and Security in Schools Project aimed at reducing the crime level among the nation’s youth.

The initiative, targeted at youth between the ages of 10 and 29 years, including 981 primary and secondary schools, and 50 communities, was launched during a breakfast meeting at the Spanish Court Hotel in New Kingston on Wednesday (October 4).

It involves collaboration among the Minister of Education, Youth and Information, the United States Agency for International Development (USAID) and the National Education Trust (NET).

The project will be undertaken over two years with US$3 million in funding from USAID and $1 million from the Government of Jamaica.

The specific objectives of the Improved Safety and Security in Schools Project include reducing violence and critical incidents among youth; reducing antisocial behaviour among youth; engaging more parents and communities in the behaviour change process; providing co-curricular activities that will engage students and assist them with developing better social and life skills; conducting data collection and analysis, along with monitoring and evaluating activities, which will continue to inform decision makers on the management of crime and violence, particularly among youth; and building capacity in the Education Ministry and its agencies.

At the launch held during a breakfast meeting at the Spanish Court Hotel in New Kingston on Wednesday (October 4), Education Minister, Senator the Hon. Ruel Reid, said education is one of the best ways to reduce crime in Jamaica.

He said research shows that increasing enrolment in secondary school reduces the risk of war. “Education fosters peace,” he noted.

Senator Reid said that not only will the project have a ripple effect on crime at the national level, but is a major investment in Jamaica’s education system.

“We are here, because we believe in the liberating force of education. Education is the safest investment. When you invest in education, you breathe life into people. Education opens up a world of possibilities. Its importance to human development cannot and can never be disputed,” he added.

Acting Deputy Chief of Mission, United States Embassy in Jamaica, Maura Barry-Boyle, noted that the project is part of the Caribbean Basin Security Initiative aimed at strengthening regional cooperation on citizen security and combating the flow of illicit narcotics and other transnational crimes that threaten regional security.

She noted that the Safety and Security in Schools Project will serve to make inroads into crime and violence at the micro level.

“The objective… is to implement the necessary measures to transform schools and their immediate surroundings into safe zones through a multilayered, multisectoral approach utilising communities, parents, public and private partnerships in an effort to ensure a quality education system and to raise the bar to benefit all learners.

“We all know that education is the basis for everything that comes later in life. The school is a home away from home that can inspire, encourage and invigorate students. Education is what grows our communities. It brings children and parents alike together with a common goal and purpose,” she pointed out.

NET Managing Director, Marcia Phillips Dawkins, in her remarks said the entity “is proud to advance the partnership for continued support from the people of America through the Caribbean Basin Security Initiative to the people of Jamaica in a most crucial area of our country, the safety and security of our youth”.

CAPTION: Minister of Education, Youth and Information, Senator the Hon. Ruel Reid (2nd left), is in conversation with (from left) Chairman of the National Education Trust (NET), Nicholas Scott; Deputy Chief of Mission, United States Embassy in Jamaica, Maura Barry-Boyle; and Chief Executive Officer, Digicel Foundation, Dane Richardson. Occasion was the launch of the Improved Safety and Security in Schools Project at the Spanish Court Hotel in New Kingston on Wednesday (October 4).

The programme for the Electronic Media and Content sector in Jamaica is managed by the Ministry of Education, Youth and Information.  The Information Division supports the Minister in designing and implementing the policy and legislative framework while the sector is...
read more