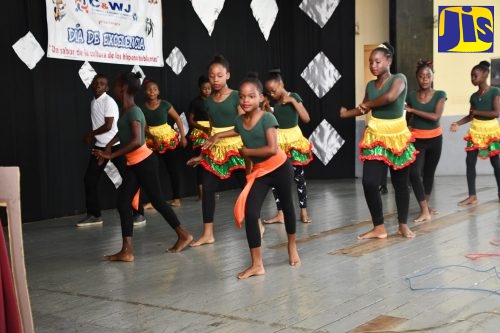 JIS: Jamaican educators have been commended for their Spanish language teaching methods, which are being employed in schools across the island, by Charge d’Affaires at the Embassy of Spain, Victoria Garcia.

Ms. Garcia was addressing students at the Ministry of Education, Youth and Information Region Four’s biennial Day of Excellence (Dia de Excelencia) Primary School Spanish Competition, which was held at the St. John’s Methodist Church Action Centre in St. James on May 16.

“I would like to specially commend the work of the Jamaican teachers. I cannot think of a more noble profession than education… . Teachers are the brick and mortar of a society – the key to its success,” Ms. Garcia said.

“You are a part of one of the most beautiful and demanding professions since you have in your hands the most precious raw material that there is, for you to mold and shape,” she added.

Meanwhile, Ms. Garcia has underscored that the Spanish Embassy is committed to assisting the Jamaican Government in its thrust to make Spanish the foreign language of choice in the island.

“The embassy of Spain is willing and ready to help the Jamaican Government, and particularly the Education Ministry, in its endeavour to make Spanish the number-one foreign language in Jamaica. We commend those efforts, and you can count on us to help you achieve your goals,” Ms. Garcia assured.

The event saw primary schools from across Western Jamaica competing in the categories of poetry, drama, song and dance, as well as a booth contest, for which students showcased the cultures of various Spanish-speaking countries.

CAPTION: Students from Lucea Primary School, in Hanover perform during the Ministry of Education, Youth and Information Region Four’s Day of Excellence (Dia de Excelencia) Primary School Spanish Competition, which was held at the St. John’s Methodist Church Action Centre in St. James on May 16.

The overall winner of the performing aspect of the competition was Chetwood Memorial Primary School from St. James, while Savanna-la-Mar Primary School, from Westmoreland, won for best booth.