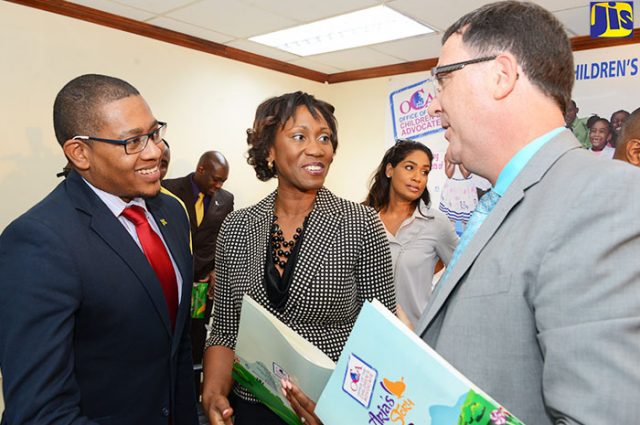 JIS: State Minister in the Ministry of Education, Youth and Information, Hon. Floyd Green, is imploring Jamaicans to do more to protect the nation’s children by telling what they know about incidents of child abuse.

“As a society, are we doing enough?…I think we all have a greater role to play. Unless we all recognise that every child is our individual responsibility, as if that child were our own, then we will continue to have these issues (child abuse),” he said.

Mr. Green was addressing the media launch of the Office of the Children’s Advocate (OCA) public education campaign on child abuse at the agency’s offices in downtown Kingston on Tuesday (February 7).

He lamented that it is becoming too commonplace to hear of children being abused and even murdered in Jamaica, noting that many persons are aware of ongoing circumstances of child abuse but refuse to speak up.

“When we know what is happening, (we need to) call the authorities, (there is) the Child Development Agency (CDA), the Office of the Children’s Registry (OCR) and the OCA,” he noted.

Mr. Green said the Government has taken a zero tolerance approach to child abuse, pointing to several initiatives that have been undertaken in the Ministry of National Security, as well as the Youth Ministry.

He pointed particularly to the ongoing Break the Silence Campaign by the Ministry which encourages persons to speak up in cases of child abuse. He noted that the OCA’s campaign will help to bolster this initiative.

Mr. Green noted that the OCA’s campaign presents an innovative way to bring a number of issues to the fore “and to help our young people confront those issues…and also encourage our young people, when they are facing issues of abuse to speak up”.

Dubbed ‘Aria’s Story’, the campaign is in the form of an online animated mini-series that will be rolled out across various social media platforms.

The episodes, which will begin airing on Monday (February 13), define and highlight the nature and types of abuse that children experience in order to empower those in abusive situations to take preventative actions and find solutions.

Persons can follow ‘Arias Story’ on the website: www.ariastory.com, which will have interactive content, where feedback is invited. There is also an instagram and twitter handle: @readariastory; as well as the hashtag #ariastoryoca to encourage discussion on issues that will be raised.

This initiative is being undertaken with funding support from the High Commission of Canada in Jamaica.

CAPTION: State Minister for Education, Youth and Information, Hon. Floyd Green (left), speaks High Commissioner of Canada to Jamaica, His Excellency Sylvain Fabi (right), while Children’s Advocate, Diahann Gordon Harrison, looks on. Occasion was the media launch of the Office of the Children’s Advocate (OCA) public education campaign on child abuse at the agency’s offices in downtown Kingston on Tuesday (February 7). The campaign, dubbed ‘Aria’s Story’, takes the form of an online animated miniseries that will be rolled out across various social media platforms.