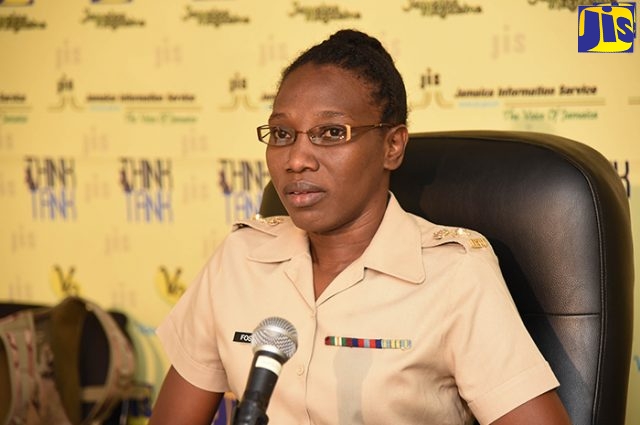 JIS: The Jamaica Combined Cadet Force (JCCF) is aiming to tackle crime by engaging the nation’s youth and diverting them from becoming involved in illicit activities.

“The JCCF is able to transform children of deviant behaviour. We can’t fix all the problems… but we are willing to try. We are not giving up on anyone – good, bad or indifferent – and we are here to help boys and girls,” shared Lieutenant Colonel Foster.

In the 92 cadet units islandwide, students receive training in leadership, first aid, the use of maps and compasses, field craft and military knowledge along with other educational skills.

JCCF Commandant, Colonel Errol Johnson, who also spoke at the Think Tank, expressed confidence that the organisation can transform delinquent youth because the activities coordinated by the uniformed group instil core values that result in them becoming productive and well-rounded citizens.

“Our programme will find work for those idle hands. This will have a positive impact on them as they will be going on an expedition, going on the range and going on a ceremonial parade,” he said.

Colonel Johnson added that as a part of their 75th anniversary, being celebrated from November 2018 to November 2019, the organisation will be targeting unattached youth by creating replicas of the Independent Cadet Unit, an infantry arm of the JCCF comprising students from different schools.

“What we are looking at is establishing these independent units throughout the country that will attract these youngsters who have dropped out of school, to bring them into a learning environment. By reshaping their minds, we will be able to get them back into the formal education system and, by so doing, I think the parents will be more comfortable knowing that their [children are] now in a diverted situation,” he said.