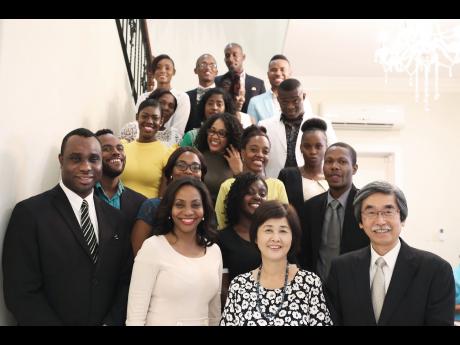 GLEANER: It was an evening at the 2017 JET Programme, send-off reception, as is customary, where accolades poured, toasts were raised, and wishes heaped upon the eighteen youngsters who were due to depart to Japan, to begin their journey as assistant language teachers, (ALTs) on the Japan Exchange and Teaching (JET) Programme.

The air of excitement and anticipation of what life would be like in an Asian culture, where the pace is slow, culture is deep rooted in spiritual manifestation, attention to detail is impeccable, and punctuality is measured in nanoseconds.

Started in Jamaica in 2000, JET’s popularity has been growing since its inception, almost 350 participants have gone to teach English at mostly public schools throughout Japan.

“This year, we received a total of 266 applications, and you are extremely fortunate to have this opportunity of being selected from among so many applicants,” said Masanori Nakano, ambassador of Japan to Jamaica. “I would like to congratulate you all again on becoming JET members and representing Jamaica.”

JET is a window and a gateway not only to teach, but to be one’s country’s cultural ambassadors and to expand one’s knowledge base.

“Lifechanging” and “enriching” are words used by all previous participants of the programme, who described their experiences in the Land of the Rising Sun.

Karen Bailey-Coleman, ALT in Kobe City, Hyogo, Japan, says that her experience in Japan has give her a different perspective onlife, both professionally and personally.

Growing up on Japanese television drama Oshin, aired on Jamaica Broadcasting Corporation in 1991, her dreams to travel to Oshin’s home was realised 13 years later in July 2004.

“My experiences have truly enhanced the course of my life and given me a deeper appreciation of my own Jamaican culture as a non-diplomat ‘ambassador at-large,” Bailey-Colemen said.

She returned to Jamaica in 2007, and almost 10 years later, she says that she is grateful that her experiences have gone a long way towards defining her as an individual.

“Each day in Japan was a day I spent investing in the growth of my students in understanding how to speak, listen, understand and communicate not only in the subject of English as a foreign language, but also the cultural aspects of Jamaica,” Bailey-Coleman said.

Marsha Dennie, who was in Tottori Prefecture from 2002-2005, said that she was nervous at first. “I was apprehensive about my new life,” she said. “Being a person with dark skin, I was worried that I would have trouble fitting in.”

But, she said, those fears were dissipated, and she was able to blend in and make memories in and out of the classroom.

“Some of the unforgettable memories that now flood my mind,” Dennie said, “were dressing up as Santa Claus and handing out Christmas presents to delighted kids; cooking Jamaican food for an appreciative group of locals.”

She sang Bob Marley’s song Three Little Birds with her students at the school festival; harvested sweet potatoes with a group of elementary school kids; climbed a mountain for the first time (Mt Daisen); wore a kimono; and participated in the many Japanese cultural events.

Dennie described her experience in Japan as one that has made her more confident, self-assured, tolerant, open-minded, and culturally aware than she ever was.

She is vice-president of Jamaica Japan Exchange Teachers Alumni Association (JJETAA), and she said it is her goal to strengthen the cultural bridge between Japan and Jamaica.

Nakano, in his address to the participants of the 2017 cohort, encouraged them to look beyond the classroom and embrace the holistic experience that they have been accorded.

“JET participants are encouraged to immerse themselves in the culture and, in return, share their rich heritage with students, teachers, and everyone with whom they come in contact,” he said. “This exchange and camaraderie create an invaluable bond between the two countries.”

For Sheena Jarrett, who was in Osaka from 2008 to 2013, it was a fulfilment, among other things, the dream of travelling to a foreign country and experiencing a culture that was very different from her own.

“You are compelled to step outside of your comfort zone and explore unchartered territories,” Jarrett said. “It hasn’t always been easy, but I have never regretted my decision.”

Bailey-Colemen said that living and working in a Japanese society in Kobe City gave her amazing opportunities to meet and maintain some lifelong mentors, mentees, friends, associates, and acquaintances. These, she said, were responsible for her all-round success as a “Jamaican’anese”.

“Each day in Japan was a day I spent investing in the growth of my students in understanding how to speak, listen, understand and communicate not only English as a Foreign Language, but also the cultural aspects of Jamaica,” she said. “I wouldn’t trade my Japan-related experiences for the world. Totemo Arigatou (I express my gratitude), Japan!”

“Anyone who has been on the programme will tell you that it’s not just a teaching job,” Jarrett said. “It is a life-altering experience.”

It is an embedded philosophy of Buddhism, one of Japan’s major religions, that “it is better to travel than arrive,” for life is a journey and we evolve each day we travel, we experience, we educate, and more important, we learn.

The Japan Exchange and Teaching (JET) Programme is a large-scale exchange programme administered by the Ministry of Internal Affairs and Communications, the Ministry of Foreign Affairs, the Ministry of Education, Culture, Sports, Science and Technology, and the Council of Local Authorities for International Relations (CLAIR) in Japan.

Through the JET Programme, people from participating countries are invited to Japan and are appointed to work as ALTs (assistant language teachers), CIRs (coordinators for international relations), or SEAs (sports exchange advisors) by local governments in Japan for one year (up to five years), note that Jamaicans can only apply for the ALT position at this moment.

The JET Programme aims to promote internationalisation in Japan’s local communities by improving foreign language education and developing international exchange at the community level by fostering ties between Japanese youth and foreign youth. The objectives of the programme are being achieved as JET Programme participants serve in local authorities as well as in public and private elementary, and junior and senior high schools in Japan.

CAPTION: Japanese Ambassador to Jamaica, Masanori Nakano, (second right) with Dean-Roy Bernard, permanent secretary, Ministry of Education, Youth and Information, along with the 2017 selected Japan Exchange and Teaching (JET) Programme Participants at a Farewell Reception held in honour of the JET participants