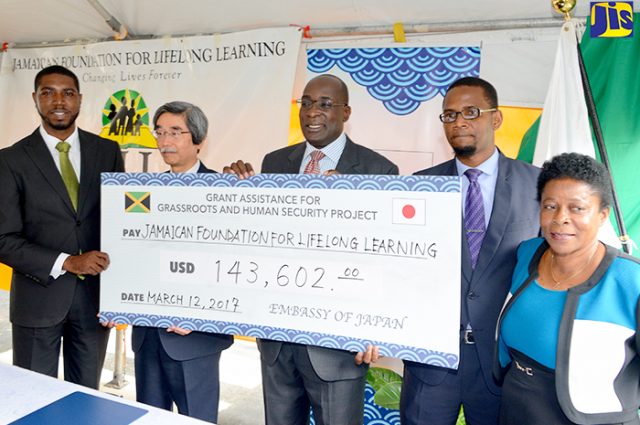 JIS: Persons enrolled at the Jamaican Foundation for Lifelong Learning (JFLL) Adult Education Centre (AEC) on East Street in Kingston, will soon benefit from three additional classrooms to be constructed with an $18.2 million grant provision from the Government of Japan.

The six-month project, which also includes restrooms, a staffroom and a computer room, will assist in boosting the JFLL’s capacity to accommodate more students.

Funding has been provided under the Japanese Government’s Grant Assistance for Grassroots Human Security Projects Programme.

The grant agreement was signed by Japan’s Ambassador to Jamaica, His Excellency Masanori Nakano, and JFLL Executive Director, Worrel Hibbert, at the East Street centre on Sunday, March 12.

The signing was witnessed by Education, Youth and Information Minister, Senator the Hon. Ruel Reid.

In his remarks, Senator Reid thanked the Japanese Government for their generous donation which he noted was one of several provided for the development of Jamaica’s education sector through the Grassroots Human Security Projects Programme.

“I am particularly pleased with this one as it (will) facilitate an increasing demand for the JFLL’s adult education offerings here at the East Street Adult Education Centre,” he said.

The Minister noted that the assistance was timely, given the spike in the number of adult learners outside the target zone for which the centre catered, who want to be registered.

This, he attributed in large part to the JFLL’s introduction of the High School Diploma Equivalency (HSDE) programme.

Ambassador Nakano, in his remarks, said the Embassy endorsed the project after seeing the great need of the JFLL to expand the East Street centre’s infrastructure to accommodate the growing demand for its services.

“I understand that currently the AEC has an enrolment of 301 adult learners, which more than doubles the capacity for 150 adult learners. Additionally, nearly 200 new adult learners are also on a waiting list in addition to other potential adult learners from the parishes of St. Catherine, St. Thomas, Clarendon and St. Mary, who are also seeking registration at the centre,” the Ambassador said.

Noting that this was the first collaboration between the Embassy and the JFLL, Mr. Nakano expressed the hope that the project would serve to benefit the participants and the wider society.

The East Street centre was designed to serve the needs of adult learners in some 20 communities in Central and Western Kingston, and St. Andrew.

When completed, the facility will be the model Centre of Excellence for adult education in Jamaica.

It will also consolidate JFLL’s two other AECs, located at Darling Street and Bell Road in Kingston, for cost efficiency, teaching and learning effectiveness.

CAPTION: Education, Youth and Information Minister, Senator the Hon. Ruel Reid (third left), and Japan’s Ambassador to Jamaica, His Excellency Masanori Nakano (second left), display the symbolic cheque for $18.2 million in grant assistance from the Japanese Government for expansion of the Jamaican Foundation for Lifelong Learning (JFLL) Adult Education Centre on East Street in Kingston. The signing took place at the centre on Sunday, March 12. Others, from left, are: JFLL Chairman, Warren Newby; Executive Director, Worrel Hibbert and Kingston and St. Andrew Parish Manager, Lurene Wright. The funds have been provided under the Government of Japan’s Grant Assistance for Grassroots Human Security Projects Programme.