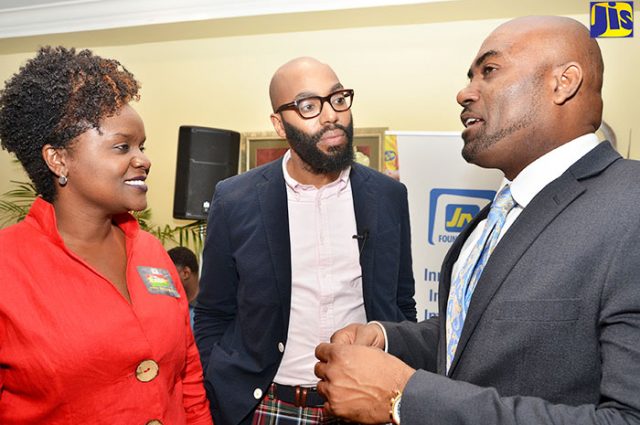 The project was officially launched during a function held at The Knutsford Court Hotel in New Kingston on Wednesday (February 22).

Whereas Science Genius uses hip-hop music in the United States to reach students, Science Genius Jamaica will use dancehall music to bring the subject to life for students and teachers in an exciting ‘dancehall clash’ competition that is geared at helping them to explore and discover the wonders of science.

Senior Manager, Learning, Development and Culture at JN Group, Dr. Renée Rattray, said the initiative aims to inspire the confidence of students by using music and culture to get them more enthused about learning.

“As part of the broader science movement initiated by Chris (Prof. Emdin) in New York schools a few years ago, our project aims to connect youth culture with education, so that learning the rigourous content of mathematics and science becomes more effortless for young people,” Dr. Rattray said.

She noted that data show that students are not performing as well as they should in mathematics and the core science subjects. She said the pass rate for Mathematics is 48 per cent; Chemistry, 57 per cent; and Physics, 63 per cent.

“The influence of dancehall on our young people is a no-brainer. It is our popular culture and its influences, today, extend beyond class boundaries and country borders. It is like the air our children breathe,” she said.

Minister of Science, Energy and Technology, Dr. the Hon. Andrew Wheatley, welcomed the project, noting that it is intended to convert students into science lovers through the use of popular culture.

“I thank the JN Group and its Foundation for setting an excellent precedence in public-private sector partnership in assisting in the rescue mission of science and mathematics in Jamaica. So let me say thank you for your efforts in birthing the new generation of scientists, mathematicians, statisticians, engineers, botanists – both girls and boys,” Dr. Wheatley said.

He also thanked Professor Emdin for taking the time to come to Jamaica to introduce his model of fusing popular music with science and mathematics education.

“Importantly, and as the educators have stated, this new fusion approach brings the sciences and the arts together and, in the land of reggae and dancehall I believe it will reap positive results in the near future and improve the national Caribbean Secondary Education Certificate (CSEC) Science performance,” he noted.

“We all recongnise now that no one cap fits all and no one size fits all and you have to take different approaches if you are going to truly connect with your students,” Mr. Green said.

Meanwhile, Professor Emdin noted that by merging dancehall to science “you are retraining the brain of youth who are embedded in dancehall, to reimagine themselves as scientists”.

Under the project, grade-nine students and teachers will be invited to submit videos to the JN Foundation Team by Tuesday, February 28.

Teachers and students will be coached over a five-week period to create and deliver dancehall and reggae songs with purely scientific content.

Project Ambassadors Tifa and Wayne Marshall will visit the schools and mentor students and teachers as well as assist them with the development of their songs.

In the final phase, teams will engage in classical dancehall clashes called BATTLES, an acronym for Bringing Attention to Transforming Teaching, Learning and Engagement in Science.

The five best schools and five top individual students will move on to the final round of BATTLES, where they will be judged by a team comprised of the project mentors, other professionals from the music industry, scientists and educators.

Teachers and students will compete for cash, laptops, among other prizes. The winning school will also receive funds for its science labs.

CAPTION: Minister of Science, Energy and Technology, Dr. the Hon. Andrew Wheatley (right), speaks with Senior Manager, Learning, Development and Culture at the Jamaica National (JN) Group, Dr. Renée Rattray and Mathematics and Science Professor at Columbia University, Christopher Emdin. They were at the launch of the ‘Science Genius Jamaica’ education project at The Knutsford Court Hotel in New Kingston on February 22.