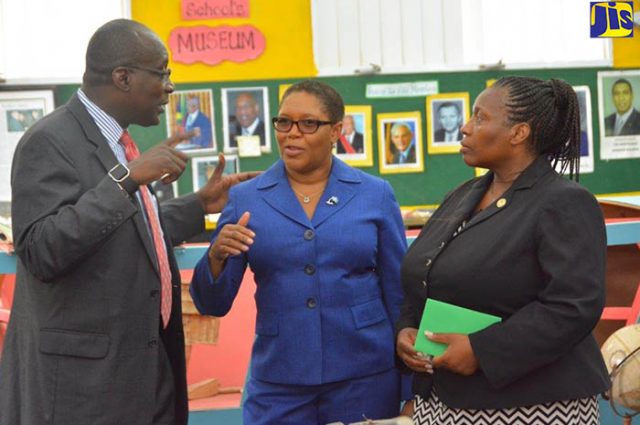 JIS: Student achievement in mathematics at the John Rollins Success Primary School in St. James was not always something that could be spoken about with pride.

But this was before the introduction of the Calculation Time programme in 2011.

The initiative, which is a collaborative effort between the Governments of Japan and Jamaica, is designed to improve students’ knowledge and appreciation of the subject.

It incorporates the use of songs, toys, workbooks and domino cards to make maths fun. For 15 minutes per day over 90 days, students from grades one to six are immersed in the innovative method of teaching the subject.

With the introduction of the programme, the students’ ability to solve mathematics problems with greater speed and accuracy has significantly improved at all levels, particularly in the Grade Four Numeracy Test and the Grade Six Achievement Test (GSAT).

For Principal of John Rollins Success, Yvonne Miller-Wisdom, the programme has brought a turnaround in maths results at the school.

Delivering a report during a recent mathematics awards ceremony, she says that mastery level in the Grade Four Numeracy Test went up to 60 per cent in 2016, from 30 per cent in 2010.

“We intend to continue to execute the Calculation Time programme with the intention of achieving 100 per cent mastery,” she notes.

She says the school has also seen an increase in the number of students scoring more than 90 per cent in the subject area in the Grade Six Achievement Test (GSAT).

But the achievements did not stop there. In 2016, John Rollins Success Primary was declared the champion school in the region four Mathematics Olympics, copping 12 trophies.

“The students have succeeded in other mathematics competitions, as well, which includes the University of the West Indies (UWI) Mathematics Olympiad in 2013, which saw two students in grades five and six receiving honorary mention. This means that the two students performed among the top three per cent in the island,” Mrs. Miller-Wisdom points out.

She notes, further, that in 2014, the school was ranked among the top-10 performing primary institutions in St. James that gained scores above the national average.

“John Rollins Success Primary School is one of the schools that pioneered the implementation of the Calculation Time programme. Today, I stand a proud principal because of the successful impact the programme has made on the performance of the students in mathematics,” she says.

She notes that the students enjoy the sessions and are actively engaged, adding that the programme allows for self-regulation, friendly rivalry and fun as well as improvement in fact fluency.

“The white card with the black dots, workbooks, the Calculation Time theme song and the activities allow the students to develop speed and accuracy in calculating,” she points out.

She says teachers incorporate a tracking system and provide immediate and constant feedback to the students.

Mrs. Miller-Wisdom says the programme would not be a success without the input of Education Officer, Seymour Hamilton, and his team, “who have kept abreast of the programme by visiting schools, giving feedback to staff, encouraging students and making sure that we send them pretest and post-test results”.

She is encouraging other schools on the project to make good use of the resources provided. “We make sure that they are properly stored and students and teachers are able to access them,” she points out.

Providing an overview of the initiative, Mr. Hamilton informs that Calculation Time was introduced as a response to the need for students to develop mental prowess in working with numbers.

He says it is designed to help students develop a better appreciation for mathematics; and calculate more accurately and efficiently mentally.

He notes that the programme started in seven schools, and at the time it was only taught at the grade-three level.

“After the first year, we did some review, and based on the feedback from the teachers, we decided that we were going to venture into 20 schools…the programme was introduced to students from grades one through six,” he explains, noting that it has since been extended to 91 schools.

The Japanese-owned Marubeni Caribbean Power, which is the parent company of JPS, presented $100,000 to each institution for the purchase of learning resources and equipment to improve the teaching and learning of maths.

Minister of Education, Youth and Information, Senator the Hon. Ruel Reid, lauded the partnership between Jamaica and Japan in improving student achievement in mathematics.

He noted that JPS will require a reservoir of quality trained persons, so it is in the company’s best interest to invest in a programme of mathematics.

He commended the Japanese Embassy and the Japan International Cooperation Agency (JICA), “which have continued this Calculation Time programme”.

He encouraged children to value the subject of mathematics, adding that it is the language that drives science.

“It is quite a useful tool to find a logical solution when you face problems. I wish that you will work hard and enjoy the art of science,” he said.

The Calculation Time programme is now available in the form of an app at https://goo.gl/aSuP71 and is accessible to all students at the primary level.

CAPTION: Minister of Education, Youth and Information, Senator the Hon. Ruel Reid, speaks with Principal of the John Rollins Success Primary School, Yvonne Miller-Wisdom (right) and Vice Chairman of the School Board, Marlene Stephenson Dalley, during a tour of the institution in St. James recently.