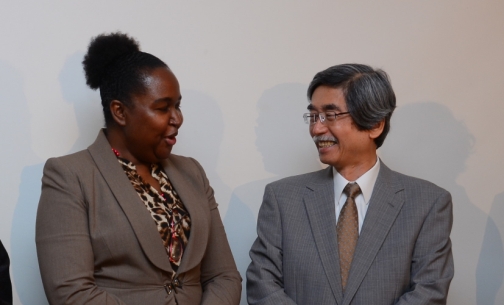 All primary schools across the island will now have access to the ‘Calculation Time’ Mathematics application (app), which is designed to improve students’ knowledge and appreciation of the subject.

The app, which was officially launched at the Courtleigh Hotel and Suites, in New Kingston, on April 29, is one of the methodologies used under the ‘Calculation Time’ programme, which aims to make learning Mathematics fun for students.

The programme, which is a collaborative effort between the Governments of Japan and Jamaica, was first introduced to the country in 2011 in seven pilot schools. It has since been extended to 65 schools. It is incorporated into the curriculum for 15 minutes for 90 days.

Ambassador of Japan to Jamaica, His Excellency Masanori Nakano, said the Calculation Time initiative, which also incorporates the use of songs, toys, workbooks and domino cards is a “very innovative way to make Maths fun.”

He said it is important that students learn to better understand the subject, “as nowadays Mathematics is gaining more and more importance to pursue any kind of study, even including humanity courses.”

For her part, Chief Education Officer in the Ministry of Education, Youth and Information, Dr Grace McLean, said she is pleased with the partnership with the Japanese Government through the Japan International Cooperation Agency (JICA), “as we seek to use the collaborative approach to improve the performance of Mathematics within our country.”

She noted that the initiative was introduced as a response to the need for students to develop mental prowess in working with numbers.

“Children were relying too much on the use of their fingers … to solve problems that require computational skills. The programme has tremendously influenced students’ development of the skill of mental calculation,” she said.

Dr McLean said the programme will be important to developing the skill sets of students as Jamaica strives to take its place within a “fiercely competitive and highly globalised marketplace”.

“The persons who will be best equipped to provide leadership in many significant areas are those whose reasoning, problem solving and critical thinking skills are best developed,” she argued.

The programme, which is expected to be rolled out in all 774 primary schools, is designed to help students develop a better appreciation for mathematics; calculate more accurately and efficiently mentally; and integrate calculation skills.

The ‘Calculation Time’ app has been available under the Government’s $1.4 billion Tablets in School programme.

Links to the app are available for download to personal computers (PC) and android devices, such as tablets and phones.

The links are: Windows PC – https://goo.gl/aSuP71; and Android devices – https://drive.google.com/open?id=0BwkP4CA5QwrEfjNkb0ROV1dRVVdNTFlGZnNyaEc2Q2VKNThlNGFWYU0yUlUwNVhPVHc4alU

During the ceremony, 20 laptop computers were handed over to schools to further enhance the Calculation Time programme.

CAPTION: Chief Education Officer in the Ministry of education, Youth and Information, Dr Grace McLean (left), in discussion with Ambassador of Japan to Jamaica, His Excellency Masanori Nakano during the launch of the ‘Calculation Time’ Mathematics  application (app), at the Courtleigh Hotel and Suites in New Kingston, on Friday.

The Ministry of Education and Youth is pleased to share with all our stakeholders the report on the Primary Exit Profile (PEP) for 2021 We hope that our analysis of the results will be beneficial to you and will guide...
read more