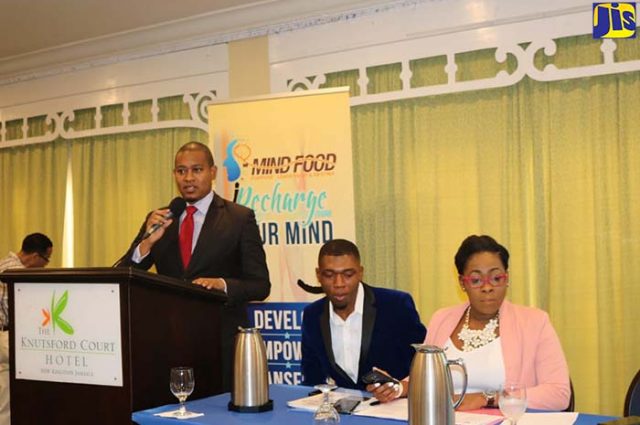 JIS: Minister of State in the Ministry of Education, Youth and Information, Hon. Floyd Green, has underscored the value of mentorship programmes in improving outcomes for underperforming or unattached young people.

Mr. Green, who was addressing the Jamaica Leadership Summit at The Knutsford Court Hotel in New Kingston on Thursday (July 19), noted that initiatives that match students who are not doing well in school with their high-performing peers help to boost academic results.

He gave the example of Belmont Academy in Westmoreland, which has developed a model that pairs top-performing students with the weaker pupils as mentors.

The nine-year-old institution was ranked as the most-improved high school in the 2016 Caribbean Secondary Education Certificate (CSEC) exams by Educate Jamaica, with 93 per cent of its students passing five or more subjects, from 75 per cent in the previous year.

“They (Belmont Academy) have been able to do well by using their mentorship model,” Mr. Green pointed out.

The Education State Minister noted, however, that mentorship is not only needed in education but “right across the board”.

“So (we need to) establish formal and informal mentorship that pairs more experienced persons with the younger people or models that focus on leadership competencies,” he said.

He noted that many young people are unable to express themselves well, and peer-mentoring relationships will enable them to communicate their feelings and emotions more effectively.

“So, you’re pairing people who can complement each other. Mentorship, in general, is more effective in communicating messages clearly among peers. They will know how to reach each other.

You’ll see somebody who is doing much better and they will know how to help the other to do better,” Mr. Green said.

“It is something that we’ve seen that has worked tremendously,” he added.

The Jamaica Leadership Summit, hosted by Mind Food International, was targeted at leaders and aspiring leaders in the public and private sectors, equipping them with best practices to enable them to attain their goals and better lead others.

CAPTION: Minister of State in the Ministry of Education, Youth and Information, Hon. Floyd Green (left), addresses the Jamaica Leadership Summit held at The Knutsford Court Hotel in New Kingston on Thursday (July 19). Seated from right are Natasha and Jamar Wright of Mind Food International, which organised the event.