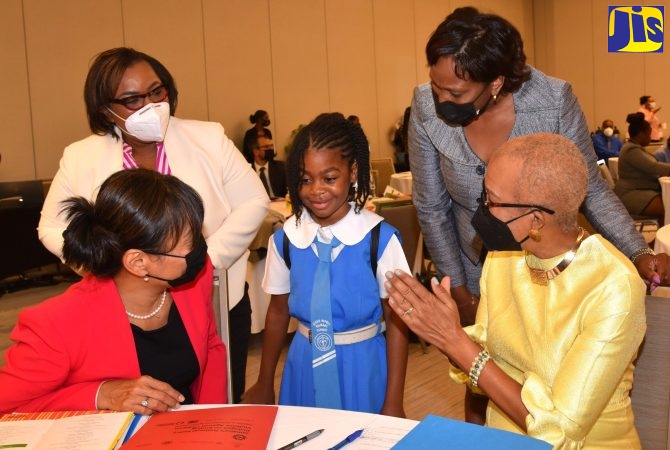 With an average of 34 calls on matters of child abuse received each day by the Child Protection and Family Services Agency, Minister of Education and Youth, Hon. Fayval Williams is reigniting the call to end violence against Jamaican children.

The Minister noted that corporal punishment, which is defined as physical punishment such as caning or flogging, is still being practiced in the country despite the government being strongly against the act.

“Data from the Jamaica Survey of Living Conditions shows that corporal punishment is the most used method across urban and rural areas, across age groups, across [genders], across [social classes],” the Minister informed.

The data shows, however, that children in the corporate area are more likely to be exposed to corporal or psychological aggressive methods of punishment than children in rural areas. Meanwhile, the top three corporal punishment methods are slapping, beating with an implement and pinching. Almost 70% of boys and 65% of girls are likely to be slapped.

“Some parents or guardians even go further with psychologically aggressive methods, meaning they quarrel, they shout, they deny food,” the Minister said.

She was speaking at the opening ceremony for the National Policy Dialogue on Ending Violence Against Children at the AC Marriot Hotel in Kingston on Wednesday (May 25).

The event took place just one day after the world was shaken by a mass shooting of more than 18 children at a Texas school in the United States. The Minister described the situation as ‘tragic’.

“Sadly, we’re all too aware of acts of violence against children locally,” she said, noting that since the implementation of 211 helpline, the increase in calls shows that the situation is worse than previously thought.

She said child abuse is a “national imperative” as in some cases, the abused child grows into an abusive adult which is detrimental to “the health of Jamaican society as a whole.”

“We want to get the message all across Jamaica, that violence against our children is not acceptable, and we should not normalise it,” the Minister said.

The National Policy Dialogue is Jamaica’s premier in-country contribution to the ‘Together to End Violence Solutions Summit Series’, which was launched in December 2020 by the Global Partnership to End Violence Against Children. Jamaica became a signatory to the global partnership in 2016.

Send Us A Message Your name Your email Subject Your message Stop By The Office OFFICE HOURSMondays to Thursdays: 8:30 a.m. – 5:00 p.m.Fridays: 8:30 a.m. – 4:00 p.m.Saturdays and Sundays (Weekends), and Public Holidays: ClosedLOCATIONThe Ministry of Education and...
read more