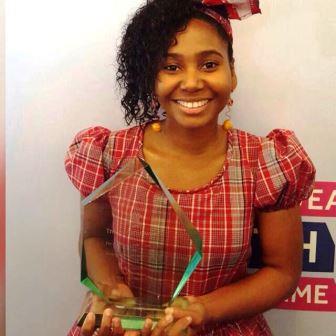 MINISTER OF STATE in the Ministry of Education, Youth and Information Floyd Green has congratulated Shamoy Hajare on her selection as Commonwealth Caribbean/Americas Young Person of the Year 2016.

Ms Hajare, who hails from St. Elizabeth and is founder of the Jamaica School for Social Entrepreneurship (JSSE), was announced as regional winner at the 2016 Commonwealth Youth Awards for Excellence in Development Work in London on March 17.  One of JSSE’s mandates is to assist youth-led organisations to transform projects into programmes through the adoption of a social enterprise model.

Minister Green said Ms. Hajare has made all of Jamaica proud and has continued the distinguished record of Jamaica’s youth as world leaders. He noted that she is a shining example for young people here in Jamaica and the region and that her work on social entrepreneurship should be emulated. Minister Green added that the administration will be placing significant emphasis on social entrepreneurship and engaging Jamaica’s youth in productive activity as a major plank in driving our country towards prosperity.

The Commonwealth Youth Awards for Excellence in Development Work aims to highlight the valuable contribution that Commonwealth young persons are making to the achievement of the development goals on the local, national, regional and global stage. The awards specifically recognise the efforts of people between 15-29 years of age and attracted over 300 nominations from countries across the Commonwealth.

Through the JSSE, Ms Hajare has implemented programmes such as Building Resilient Youth Clubs and Youth Social Entrepreneurship 101. She has carried out initiatives such as the Jamaica Sustainable Development Project, JSSE’s Hydrophonic Programme, Caribbean Youth Speak Up Campaign, the Junction Development Area Rainwater Harvesting project and the Young Changemakers Summer Camp. She is also the co-founder of the Youth Entrepreneurship Project (YEP), which was created to encourage youth entrepreneurship in Mandeville, Jamaica.