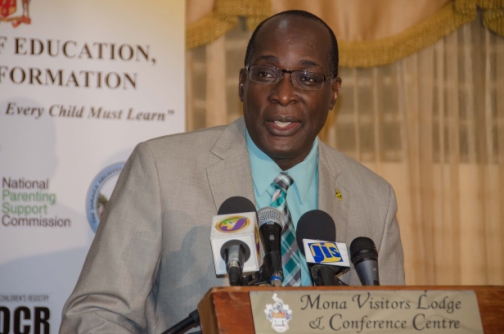 JIS: The Ministry of Education, Youth and Information has redoubled its efforts to improve passes in mathematics at the Caribbean Secondary Education Certificate (CSEC) level.

Portfolio minister, Senator Ruel Reid, informed that the number of maths coaches deployed to the school system has increased from 40 to 70.

“The ministry has also awarded 168 scholarships to student teachers pursuing courses in secondary-maths education. This is in addition to the 30 students awarded in 2015,” he said. He noted that 200 scholarships are available for the 2017/18 academic year.

“The goal of this initiative is to increase the number of fully qualified mathematics teachers available for deployment to the education system,” he pointed out.

Other measures include increased student support through camps, and the deployment of tutors to serve approximately 4,000 students in 118 secondary schools.

“We trained an additional 150 new principals and heads of departments (mathematics) in the leadership of mathematics programme developed and implemented as a partnership between the National Mathematics Programme and National College for Educational Leadership (NCEL),” Reid noted further.

He was speaking at the launch of National Mathematics Week and presentation of the Mathematics Teacher of the Year award at the Mona Visitors’ Lodge, University of the West Indies (UWI) on today.

The ministry is observing National Mathematics Week from March 5-10

Activities got under way with a church service held at the Boulevard Baptist Church in Kingston.

For the first time, road shows will be held at Holy Trinity High School in Kingston, BB Coke High in St Elizabeth and Hopewell High School in Hanover on March 7.

The main activity of the week will be the fifth staging of a Mathematics Exposition on the UWI’s Mona Campus on Thursday, March 9.

This flagship event has grown significantly, with more than 8,000 persons attending last year’s event, up from 2,000 when it was first held in 2013. Some 45 booth holders will be on hand to interact with the participants.

CAPTION: Minister of Education, Youth and Information, Senator Ruel Reid, addresses the launch of National Mathematics Week and the presentation of the Mathematics Teacher of the Year award at the Mona Visitors’ Lodge and Conference Centre on March 6, 2017.