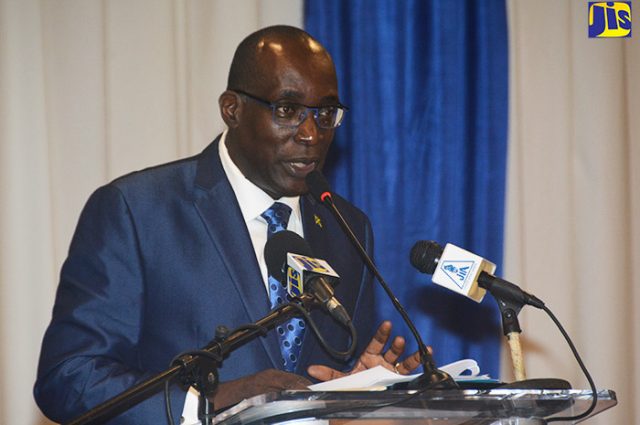 JIS: The total number of certified early childhood institutions islandwide will shortly increase to 113, up from 17 a year ago.

This, according to Education, Youth and Information Minister, Senator the Hon. Ruel Reid, reinforces the Government’s solid commitment to the early childhood sector’s development.

He was speaking at the Jamaica Teachers’ Association’s (JTA) 54th Annual Conference at the Hilton Rose Hall Resort and Spa in Montego Bay, St. James, on Wednesday (August 22).

Senator Reid said the Early Childhood Commission (ECC) has been crafting a strategy for the sector’s full transformation, which is slated to be rolled out when the 2018/19 academic year begins in September.

He said the Ministry has been working to streamline and align the education system, noting that “our focus is to support the birth to three years old group through the early stimulation programme, (thereby) allowing our babies to be developmentally ready (by age) three.”

Emphasising that the first 1,000 days are the most critical of a child’s development, Senator Reid said his Ministry will be partnering with the Ministries of Health, and Labour and Social Security, to undertake supporting engagements to be implemented by the ECC.

These, he indicated, include developmental assessments to understand competencies in order to create the learning environment that fosters early stage learners’ development, while assuring that “we are fully committed to improving the quality of our early childhood institutions as we firmly believe in providing a good start at this level.”

Meanwhile, Senator Reid advised that the 2018/19 Age Four Assessment will, for the second time, “allow us to identify, from very early, any development deficiencies to be corrected in our children.”

He said the Ministry also continues to make significant strides in advancing its K-13 Strategy.

Notable among its initiatives, the Minister pointed out, is the recently launched 0-3 Brain Builders Programme, which will benefit over 126 institutions. The programme is expected to be rolled out in the first 17 schools in September.

In the meantime, Senator Reid said primary level student preparations for transition to secondary education continues to trend in the right direction.

This, he added, resulted in “100 per cent of our students (being) placed in seven-year high schools.”

“The Ministry was able to achieve this as a result of the provision of additional classrooms to a number of our schools and the upgrade to full seven-year high schools of Nain, New Forrest, Aberdeen and Perth Town Academy,” Senator Reid further pointed out.

He also said candidates who entered for 35 subjects in the 2017/18 Caribbean Advanced Proficiency Examination (CAPE) came out with satisfactory results.

“There was an overall increase by 0.2 percentage point over the previous year with a 91.2 per cent receiving acceptable grades. As was the case last year, there was improved performance in 23 subject areas,” the Minister stated.

Additionally, he said 30,343 or 88.9 per cent of the 34,139 students who sat the 2017/18 Caribbean Secondary Education Certificate (CSEC) examination obtained acceptable grades.

Senator Reid noted that Mathematics and English Language recorded passes of 57.8 and 75.4 per cent, respectively.