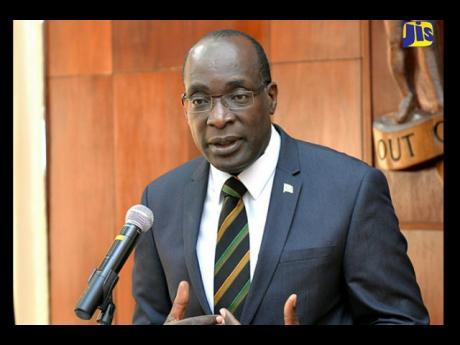 OBSERVER: THE 2017 report of the National Education Inspectorate (NEI) has revealed that there are improvements across all eight indicators of school effectiveness in the 189 institutions inspected.

According to the report, of the 189 schools inspected by NEI personnel during the last academic year, 147 were primary while 42 were secondary. Within these schools, the team observed 10,000 lessons, administered 12,000 questionnaires, conducted 1,200 interviews, and reviewed 2,800 documents. The schools are located across the six education regions.

The inspectorate indicators showed improvements in areas such as leadership and management, teaching in support of students’ learning, students’ progress, and curriculum and enhancement programmes.

Improvements were also seen in students’ performance; students’ personal and social development; use of human and material resources; and students’ safety, security, health and well-being.

Addressing a media briefing at the ministry’s Heroes Circle offices in Kingston yesterday, Minister of Education, Youth and Information Senator Ruel Reid said the ministry was very encouraged by the improvement that is taking place within public schools.

“These plans are being monitored and supported by our education officers across the system,” Senator Reid said.

The minister noted that the report revealed that improved students’ performance overall is supplemented by steady progress in curricular standards.

Meanwhile, Senator Reid said more work will be undertaken with the institutions that are in need of immediate support to ensure that their standings can be improved.

He commended all the stakeholders, especially administrators and teachers, who are making the improvements on the ground.

“I want to commend the team at the NEI for the work that they have been doing to keep us on our toes, because we have to make sure that the education system performs and it is aligned to the imperatives of the labour market as we try to ensure that we have the labour force to achieve Jamaica’s desired goal of economic growth and prosperity,” he said.

Providing a breakdown of the findings, Senator Reid informed that the overall rating for leadership and management improved by 20 per cent, when compared to the previous inspection cycle.

He noted that for teaching in support of students’ learning, more schools have been rated satisfactory and above when compared to the previous inspection cycle.

“The ratings on this indicator have improved by 11 percentage points, reflecting improvements in all sub-indicators, including the teachers’ subject knowledge and how best to teach the subject, teaching methods, assessment and students’ learning,” he said.

The report further noted that the overall rating on students’ progress improved by 21 percentage points since the first cycle of inspections, with more schools rated satisfactory and above; the overall rating on curriculum and enhancement programmes improved by five percentage points since the previous inspection cycle, with a few more schools rated satisfactory and above; and more students are performing at or above the national proficiency levels in grades four and six.

The NEI is the national education quality assurance agency operating independently of the Ministry of Education. It embraces transparency, integrity, honesty and accountability as the hallmarks and guiding principles of its operations, which it seeks to inculcate in the education system.