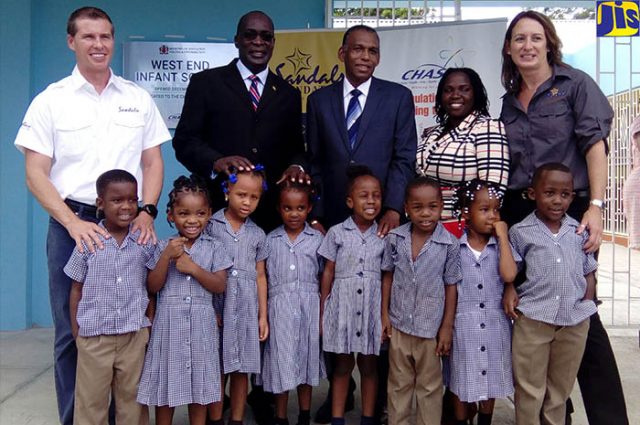 The facility, which commenced classes in September, is the result of a public-private partnership among the Sandals Foundation, the CHASE Fund and the Ministry of Education, Youth and Information. The school has the capacity to accommodate 160 students, with 60 students on roll so far.

It was built at a cost of just over $111 million with funding from the Sandals Foundation and the CHASE Fund, and comprises eight classrooms with accompanying resource rooms and bathroom facilities, a large kitchen and dining room/recreational area, a staffroom, sickbay and principal’s office.

The property also has a garden and playground. All the furniture and educational resources were donated by School Specialty, a United States-based company that supplies school equipment.

In his address at the ceremony, Minister of Education, Youth and Information, Senator the Hon. Ruel Reid, said he is extremely proud that the school has already met 98 per cent of the required standards set by the Early Childhood Commission (ECC), and within a month, following additional requisite teacher-training sessions, will reach the 100 per cent mark.

He also expressed gratitude to the two donor agencies for working with the Ministry to establish the school, which he said is crucial to national development. He called for the provision of further support to other Ministry initiatives, such as the nutrition and school-bus programme, which he said will greatly impact human development in the western end of the island.

Meanwhile, Chief Executive Officer of the CHASE Fund, William ‘Billy’ Heaven, said his organisation, which has been a key supporter of the early-childhood-education sector for the past 15 years, provided $48 million towards the construction of the school.

He emphasised that early-childhood development continues to be of critical importance to the Fund, and that returns of investment in the sector can be as high as $17 for every $1 invested.

“We at CHASE understand and we underscore the value of early-childhood education not only to the individual but also to the society. Even more critical, we understand that this is the stage that determines what adult this child will become, and there is great need to maximise the future well-being of each and every child who attends this institution,” Mr. Heaven said.

CAPTION: Minister of Education, Youth and Information, Senator the Hon. Ruel Reid (second left), with (from left) Deputy Chairman and Chief Executive Officer of Sandals Resorts International, Adam Stewart; Chief Executive Officer of the CHASE Fund, William ‘Billy’ Heaven; Principal of the West End Infant School in Negril, Sherida Malcolm; and Executive Director of the Sandals Foundation, Heidi Clarke, following the unveiling of the school plaque to mark the official opening of the school on December 6. With them are students of the institution.