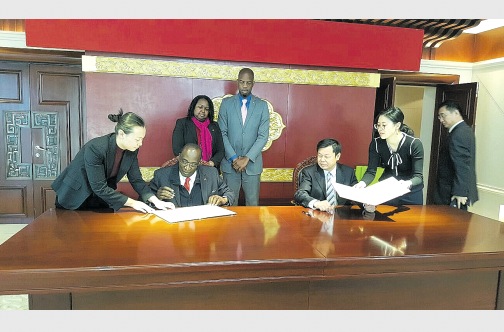 JAMAICA and China have signed agreements to implement several new initiatives in the education sector, including a student exchange programme and a reciprocal teacher exchange project, are set to begin this year.

The programme will focus on best practices in technical and vocational education (TVET) and science, technology, engineering, and maths (STEM).

The agreements were reached during a visit by a five-member Jamaican delegation, headed by Minister of Education, Youth and Information Senator Ruel Reid to China between December 11 and 19.

The visit was aimed at establishing linkages with the Ministry of Education in China as well as to view, first-hand, the manufacturing of air-conditioning and lighting systems as well as solar panels. Other members of the visiting team were Dr Fritz Pinnock, executive director of the Caribbean Maritime Institute (CMI); Robert Miller; senior advisor to the minister, Balfour Peart, master’s student at the CMI and Dr Grace McLean, chief education officer.

The team visited four provinces in China, meeting with education, youth and information personnel in Beijing as well as with representatives of China’s Youth Facilitation Agency.

In welcoming the Jamaican delegation, the agency’s deputy secretary general, Dong Xia, indicated that China has had official ties with Jamaica since 1972 and pointed to the long-standing partnerships with the Caribbean and Latin American countries.

During the discussions, an offer was made for Jamaican young people to visit China on exchange programmes commencing in 2017, with the Youth Agency head undertaking to draft an agreement and work through China’s ambassador to Jamaica to have this finalised.

During a visit to the Ministry of Education, the vice minister in the ministry, Dr Zhanyuan Du, indicated that China was interested in teacher exchanges and said a memorandum of understanding had been drafted for signing which would be an improvement on the one signed in 2014. Under the reciprocal teacher exchange programme Jamaican teachers will go to China to teach English, while teachers from China will come to Jamaica to teach Mandarin and other subjects.

Out of these discussions, the Chinese education vice minister indicated they were also interested in having further discussions on information, communication technology (ICT) as they would like to share their best practices with Jamaica.

Senator Reid said the sharing of best practices in TVET and STEM would be useful, and the Chinese agreed and indicated that the specifics of this partnership would be worked out. A memorandum of understanding was subsequently signed by the two ministers.

The visiting group also met with Gao Fan, general manager, and other representatives of the China Educational Instrument and Equipment Corporation, a company that makes mathematics and science kits for the school system in China. These kits can be customised to suit the needs of any country. A catalogue was presented and the president of the company extended an invitation to Jamaica’s Ministry of Education to partner with his company in producing kits for the Jamaican education system. A memorandum of understanding was also signed and the parties committed to follow-up talks.

Among the other places visited was the Luxun High School, which caters to children from age seven to 14 years. Considered to be one of the best in China, the school uses a mix of both the academics as well as STEM/TVET-related courses.

The Jamaican delegation was told that the Chinese have adopted aspects of the British system. The facilitator indicated that the school originally started out as a girls’ school but over the years transitioned into a co-ed school.

Chinese Vice Minister of Information Guo Weimin and members of his team said China was pleased with the partnership with Jamaica although both countries were so far apart geographically. He spoke about the 2005 China /Jamaica agreement, promoting economic co-operation and the fact that they wanted to continue to encourage economic exchanges. He said China would be moving to increase media information and exchanges as part of the steps to facilitate this improvement in the partnership.

Among other areas of the collaboration was for the two countries to have an exchange of best practices and training in the use of advance equipment, while a documentary to sell the tourism aspects of both countries is also to be produced. Scholarships for training in various fields funded by the Chinese Government are also to be provided.

Minister Reid thanked thanked the Chinese for their “generosity and excellent work” being done in Jamaica.

CAPTION: Minister of Education Senator Ruel Reid (second left) and Chinese Vice Minister of Education Dr Zhanyuan Du (seated right) sign the memorandum of understanding for the teacher exchange programme, an improvement on the document signed in 2014. Under the reciprocal teacher exchange programme, Jamaican teachers will go to China to teach English while teachers from China will come to Jamaica to teach Mandarin and other subjects. Standing at the back are Robert Miller, senior advisor to the minister of education, and Dr Grace McLean, chief education officer. Aides to the Chinese vice minister also look on.

The Youth and Adolescent Policy Division operates within Jamaica's Ministry of Education and Youth. The YAPD has core responsibility for the development, implementation and the management of policies and programmes, that will seek to foster care, provided non-formal education and...
read more