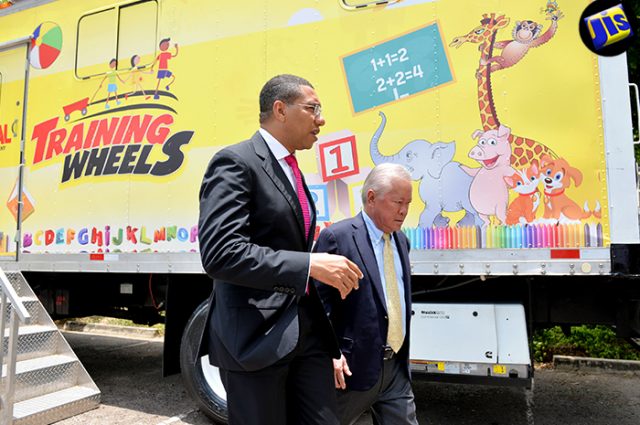 JIS: Prime Minister, the Most Hon. Andrew Holness, says there will be no compromise on the educational standards set by the Early Childhood Commission (ECC).

He noted that the 17 early-childhood institutions which have already been certified through the quality assurance mechanism of the ECC stand as an indication of the level of quality required, adding that more work is to be done to improve the infrastructure and management of education at these institutions.

“Our children deserve the best education possible, which we must not compromise,” the Prime Minister emphasised.

Mr. Holness, who was addressing the launch of a Little Leaders programme by the National Baking Company Foundation, at The Jamaica Pegasus hotel in Kingston on August 9, said the mission going forward is to maintain excellence and bring up all children to the highest standards.

He acknowledged that already there has been significant work to build the capacity of teachers and school administrators, as well as to enhance lesson delivery at the early-childhood level.

Meanwhile, Mr. Holness congratulated the National Baking Company for the launch of the Little Leaders programme, which will be distributing learning kits to more than 2,500 institutions islandwide, beginning in September.

“I applaud and endorse this initiative. Education has always been to me, a partnership exercise. It is the most valuable and rewarding investment that any country or any company can make. Truth is, this is the foundation and once you have set the foundation correctly, you can build anything on it,” he said.

The initiative targets children between the ages of three and six years, and has the objective of minimising the disparity in learning of children in this age group. It will support literacy, while also having a special focus on mathematics and science.

The programme will also feature a mobile classroom named ‘Training Wheels’, which will host workshops across the island, led by a full-time education consultant. Through a partnership with the Jamaica Observer, a weekly activity page will also be published to engage parents and children on specific lessons.

Chairperson of the ECC, Mrs. Trisha Williams-Singh, hailed National Baking Company and the Foundation for the continued demonstration of commitment to early-childhood education, noting that by providing tools, the Foundation is a significant help to schools in the attainment of ECC standards.

CAPTION: Prime Minister, the Most Hon. Andrew Holness (left), converses with Patron of the National Baking Company Foundation, Mr. Butch Hendrickson, after a tour of the mobile classroom dubbed ‘Training Wheels’, which forms part of a Little Leaders programme launched by the Foundation, on August 9, at The Jamaica Pegasus hotel in Kingston. The mobile classroom will host workshops across the island.

Over the years, the Ministry of Education, Youth & Information has engaged a number of private sector organizations in partnership agreements that assist us in carrying out our mandate of providing quality education in an innovative, inclusive and enabling environment....
read more