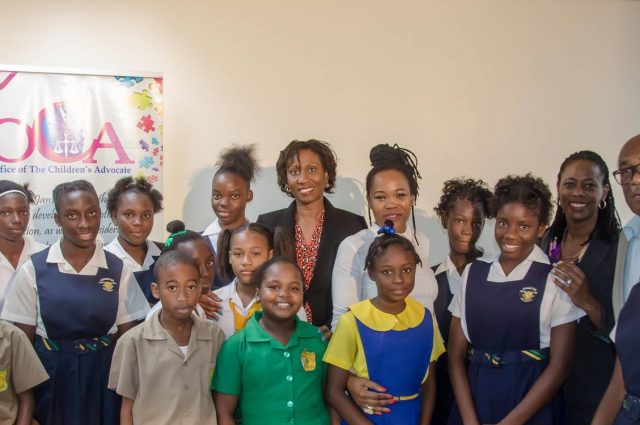 JIS: The Office of the Children’s Advocate (OCA) is partnering with the British High Commission to undertake a public outreach and education campaign, aimed at sensistising Jamaicans about the roles and functions of the office and the responsibility of citizens in protecting children.

The initiative in direct response to the increase in incidents of violence against children, and will take various forms to include school and community interventions, with meaningful information and facts about children’s rights provided during these interactions.

It is hoped that the undertaking will strengthen the OCA’s capacity in carrying out its mandate of protecting the rights and best interests of the nation’s children, and also cement the agency’s role within the minds of all Jamaicans.

The British High Commission has pledged just over $8 million (£49,022) for the campaign, which will assist the OCA in changing the culture of how Jamaicans view children and their rights and how they ultimately treat them.

Speaking at the press launch on Friday (March 17), at the OCA, downtown Kingston, Children’s Advocate, Diahann Gordon Harrison said there seems to be a lack  awareness on the part of many persons as to what they should do when faced with unkind and inhumane acts against children.

She said that the OCA realizes that children also need guidance and avenues through which to access help in difficult and troublesome situations, so the project will also plug into this deficit.

Central to the project is raising awareness of Jamaica’s signatory status to the United Nation’s Convention on the Rights of the Child and the obligations that accompany that status; ensuring that persons understand the role, functions and existence of the OCA and how the office serves the children of Jamaica; and to educate the public about what constitutes different forms of child abuse.

It will also educate Jamaicans about their responsibilities when incidents of abuse come to their attention; and how they can actively work to reshape the experiences that children have when they come into contact with members of their community and persons in authority in their schools, the justice system or else where.   British High Commissioner, His Excellency, David Fitton, in his remarks at the press launch said the High Commission is delighted to be able to complement the activities of the OCA.

“We hope that, through this project, children in Jamaica will feel empowered, will have the ability to talk to their parents, counsellors or teachers if they feel something is not right and this project will give them some guidance on what they can do,” he said.  Meanwhile, Senior Advisor at the Ministry of Education, Youth and Information, Robert Miller said that as a nation “we have a duty to the children within our care and we should give them all the support and guidance as best as possible.”

Mr. Miller brought greetings on behalf of Minister of State, Hon. Floyd Green, who has responsibility for youth affairs.

CAPTION: Children’s Advocate, Diahann Gordon Harrison (5th right, back row), shares a photo opportunity with school children at the press launch of an initiative by the Office of the Children’s Advocate (OCA) and the British High Commission to strengthen the public engagement capacity of the OCA, held on March 17, at the OCA’s offices downtown Kingston. Others sharing the moment are: Deputy Children’s Advocate, Retired Justice Henderson Downer (back row, right); Political Press Officer, European Union (Jamaica), Althea Buchanan (back row, 2nd right); and Entertainer, Queen Ifrica (back row, 4th right).