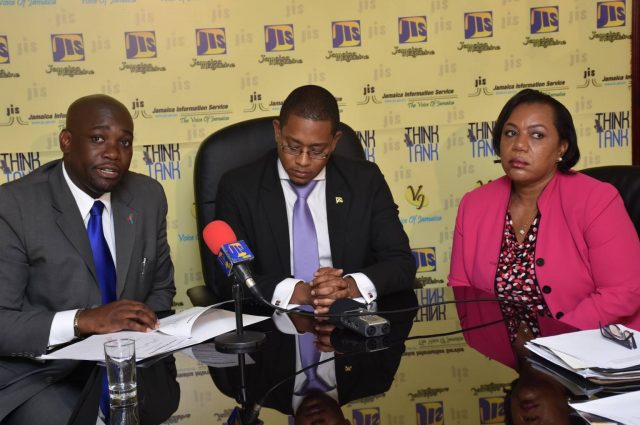 JIS: The Office of Children’s Registry (OCR) is inviting primary and high school students to apply to become child ambassadors for the period 2016 to 2018.

Applications must be submitted by May 15, 2016 and students must be between  10 and 16 years  of year years, in order to apply for the two-year programme.

Speaking at a JIS ‘Think Tank’ on April 27, Registrar at the OCR, Greig Smith, said the agency is inviting applications from all parishes, except St. Mary and St. James, as the last two child ambassadors came from those parishes.

He noted that the students will sit an interview,  following which  the successful candidates will be selected.

“Each ambassador will be formally appointed by the Minister of State in the Ministry of Education, Youth and Information, Hon. Floyd Green, before they take up the two-year post, which ends in 2018,” Mr. Smith explained.

The Registrar noted that the child ambassador programme has been helping the ORC  with the ‘Break the Silence’ and ‘Enough is Enough’ campaigns.

“Having a child ambassador will give youngsters the confidence to talk to their peers and open up, since many abuse takes place at home or by a relative,” he said.

Mr. Smith pointed out that statistics show that only one in every 10 adult Jamaicans report child abuse, but there has been an increase in children making reports, especially to their respective child ambassadors.

He said appointed students will be asked to assist with the OCR’s public education activities, such as the creation of flyers and public service announcements as well as educating their peers about what they can do to protect themselves and what they need to do if they suspect or know of cases of child abuse.

“The ambassadors will also form school clubs to deliver the OCR messages from one child to another and participate in decision making and other public education initiatives,” he added.

The Child Ambassador Programme, which was launched by the OCR in 2012, aims to get more children involved in the fight against child abuse, as well as increase their awareness of the agency’s role and functions.

Registrar at the Office of the Children’s Registry (OCR), Greig Smith, speaks at a JIS ‘Think Tank’, on April 27. Listening (from second left) are: Minister of State in the Ministry of Education, Youth and Information, Hon. Floyd Green and Chief Executive Officer (CEO) at the Child Development Agency (CDA), Rosalee Gage-Grey.

The Ministry of Education, Youth & Information is pleased to share with all our stakeholders the reports on the Primary Exit Profile (PEP). We hope that our analysis of the results will be beneficial to you and will guide you...
read more