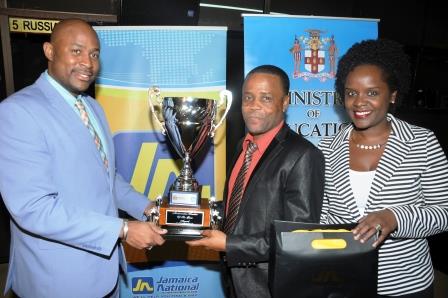 ONEAL MCLEOD, teacher at the Godfrey Stewart High School in Westmoreland, is the Ministry of Education’s Mathematics Teacher of the Year 2016.

McLeod was selected as the winner from five national finalists. Debra Morrison Muir of the Jessie Ripoll Primary school was runner-up, while the other finalists were Marlon McKenzie of the Holy Trinity High School, Karen Hartley of Bethabara Primary and Nerissa Stephens from Little London Primary.

“I feel great. Words cannot explain how I feel today,” said an elated McLeod after receiving the award during a ceremony on Tuesday at the Jamaica Conference Centre, Downtown Kingston.

“I motivate my students and as a teacher I also need motivation. This award certainly serves as motivation for me,” he stated.

His prizes include a one-year membership to the National Council of Teachers of Mathematics (NCTM), which is the world’s largest organisation concerned with mathematics education, as well as a trip to San Francisco for the NCTM 2016 Conference.

According to Dr Tamika Benjamin, National Mathematics Coordinator at the Ministry of Education, each year the Mathematics Teacher of the Year Competition is a reminder that despite teaching conditions being less than ideal, teachers continue to deliver quality mathematics lessons.

“Teachers are making a commendable attempt to ensure that students are excited by and interested in Mathematics. To this end there has been greater and more strategic use of technology and more deliberate attempts to include learning activities to which students can relate,” Benjamin said.

A total of 107 primary and secondary school teachers from across the six education regions were nominated.  Twenty-nine persons were selected as regional semi-finalists; however, only 16 advanced to the regional finals from which five were chosen for the national finals.

Each national finalist was observed teaching a mathematics lesson and was assessed by a panel of elite judges.  The candidate’s scores were weighted and totaled to determine the 2016 Mathematics Teacher of the Year.

Dr Renee Rattray, Director of Education Programmes at the JN Foundation, which is a major sponsor for the event, said it was important that mathematics became a critical component in the creative process.

“It is important that mathematics comes alive. The quality of the teacher is one of the most important and significant variables in student performance,” Rattray said.

In the photograph Mr McLeod (centre) celebrates the occasion with Dr Maurice Smith (left), Permanenet Secretary in the Ministry of Education and Dr Renee Rattray, Director of EDucation Programmes at JN Foundation, sponsor of the Mathematics Teacher of the Year Award