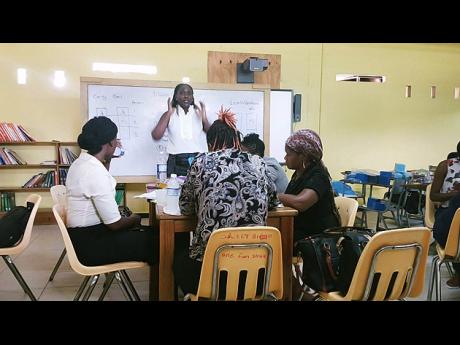 GLEANER: If children are taught the basics of mathematics in a way that they can understand, not only will they learn it well, but they will be able to teach their peers and craft a career path that can literally change the quality of their lives and Jamaica’s economic fortunes.

New York-based economist, Jamaican Linda Bailey-McWeeney is convinced that Jamaica could use this thrust as a tool to fully launch itself as a resource area for many of the emerging careers in the field of science and technology globally.

“There is a whole world of opportunities out there, and Jamaica has to take advantage of the global virtual marketplace, but first, we need to teach the kids math,” she says.

“Right now, we are creating jobs for the skill levels we have, but we have to look forward to the next ten years and ask ourselves, what kind of country do we want to be in the future? Math-based skills are predicted to be in great demand, and there is already a shortage of persons with math-based skills in Jamaica.

We need to train people to do things that are going to be valuable in the marketplace. It can be done in five years.

“It’s about leveraging the math skills. It’s something that will give us a lot more control. It’s really an opportunity Jamaica hasn’t had since the 1960s,” she says.

Last year Bailey-McWeeney took her concern about the high numbers of Jamaican students failing mathematics to a resolve, creating the Reggae Math Foundation to help children learn the basics of mathematics through a virtual class setting with local master teachers.

Convinced that half of the problem has to do with them not having learnt the basic concepts in mathematics well, she says that the intervention can happen at any time in the life of a student.

Campion College’s Kesang ‘Kippy’ Chin is already on-board for the secondary level, with plans in place to engage teachers for filming for the primary level.

Bailey-McWeeney has also arranged and facilitated workshops for local teachers with United States-based mathematics expert Dr Dionne Cross-Francis to help them review their strategies for teaching the foundation concepts.

The plan is to increase the number of children exposed to the free online videos, and the number of teachers engaged in the workshops, and the schools that can benefit from the resources available.

Bailey-McWeeney points to the many opportunities now open to young persons in the virtual marketplace.

“Our goal is not to teach them for exams, but so that they can teach someone else. We are looking at this as a long chain of events so that we are not just teaching math, but with math-based skills, you have the basic foundation, and you have a lot of options.

“The returns on education in some applied math careers are so large that people earn six-figure salaries in their 20s. Imagine if we can train students in Jamaica to learn math and extend it to training in these other careers! There is a possibility for Jamaica to remove itself from debt and address poverty in Jamaica in a meaningful way. This can happen in the next ten years if we address education problems. We cannot solve our economic problem without fixing the fact that almost 80 per cent of our labour force and current student body is not able to do globally competitive high school math. There is no path to prosperity without the majority of our citizens becoming educated. This is why we are doing this so that poor people have a path out of poverty, but we must fix math education first,” she says.

“It is no longer in the hands of other people to create our reality or wealth, and it is for Jamaica to take advantage,” she says.

The foundation already has the support of the education ministry and has reached out to other private organisations to make the project available to schools across the island.

This, Bailey-McWeeney says, is crucial as part of the reggae math foundation’s mandate is to address the high levels of absenteeism among, especially, rural school-age children, which often, forces them to miss out on key lessons and sessions.

“If students are missing class, they have to be able to see what the other students are doing. These students can then still learn and catch up.”

It is an ambitious project, but Bailey-McWeeney says that while the government is doing a lot, more needs to be done, and the initiative is one other way to help students appreciate the value of math-based skills to their future success.

Bailey-McWeeney says her interest in having persons get the basics of math right was triggered from as early as her high school years.

“I have wanted to do something for high-school-age children who weren’t learning math since I was at Immaculate Conception High School in the 1980s and realised that there were high-school-age children who could not add or subtract correctly. The desire to do something was compounded a few years later after I taught for only a few months at Wolmer’s Boys School in 1996.

“My experience taught me that if the students are given the right foundation and one-on-one support to make sure they are getting what they need, they surpass expectations. I believe that students in Jamaica are bright and motivated to learn.”

Bailey-McWeeney is currently an adjunct assistant professor at the College of Staten Island in the department of economics.

Jamaica-born, she grew up in Arlene Gardens in Kingston, migrating in 1998 to pursue a PhD in Economics from Michigan State University. Her focus then was labour economics especially economic Inequality. Her research interest are issues related to immigration policy, racial inequality, education and health.

“For me, doing economics was a way to understand economic inequality – why people were poor and what could be done. For Jamaica to address in any large way the amount of poverty and lack of economic opportunity that exists for many of her citizens, we must ensure that students are educated to be globally competitive in the future marketplace, which is global and taking place on the Internet.”

The Foundation will accept donations through its website https://www.reggaemathfoundation.org/donate/ or via smile.amazon.com, where Amazon’s Smile will donate 0.5 per cent of the purchase price to the Reggae Math Foundation if it is chosen. Please see https://smile.amazon.com/ch/81-3445051.