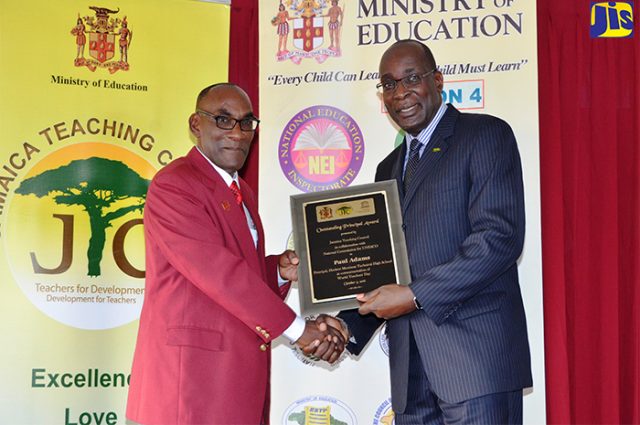 JIS: Long-serving Principal of Herbert Morrison Technical High School in Montego Bay, St. James, Paul Adams, has been awarded the 2016 Outstanding Principal of the Year by the Jamaica Teaching Council.

The award was presented to Mr. Adams by Education, Youth and Information Minister, Senator the Hon. Ruel Reid, during a recent ceremony at the school.

“We are celebrating our 40th anniversary this year and it is the rule of thumb that when a school achieves, it must be called the Outstanding Principal Award. So, I collect the award on behalf of the institution,” said Mr. Adams.

Principal of Herbert Morrison since 2002, Mr. Adams tells JIS News that as leader of the school, he feels honoured to accept the award.

He says the recognition was made possible by the hard work of every member of the school community – academic, ancillary and security staff as well as the 1,200 students.

“When I came here, I found 15 teachers who were more qualified to be the Principal and there were about 20 persons who were brighter than me…what I could not carry out myself, I found somebody who could do it better and I let them do it. We got better results,” the Principal says.

Mr. Adams paid tribute to the founding Principal of the school, Lloyd Whinstanley, “who laid a solid foundation for the current leadership and even those to come.”

He also highlights the performance of students at Herbert Morrison in all areas, especially external examinations, pointing out that despite the many distractions, they have remained focused on getting a good high school education.

“These students are the greatest set of kids. Their behaviour is superb and their performance is top of the line. We have a no cell phone policy and what the students have done is to convert their cell phones into a resource library, so when you see them on their cell phones, you will see they are actually doing their schoolwork,” Mr. Adams says.

In a citation from the Jamaica Teaching Council, Mr. Adams, who served the Jamaica Teachers’ Association as its 47th President, was lauded for his astute management of the 40-year-old school, obtaining high marks in all areas and giving students a good secondary education.

“His efforts led to significant improvements in the areas of science, modern technology and technical and vocational education. He enabled his school to etch its way into pride of place on the landscape of high schools. His analytical and reflective abilities led him in 2004 to establish a sixth form using meagre resources. In time other, Principals emulated his courage and established their sixth form. Caribbean Advanced Proficiency Examinations 2016 results have been outstanding – 100 per cent of students passed in 10 subjects,” the citation read.

The Education Minister, in paying tribute to Mr. Adams, cited the vision with which he has been leading the institution.

“Mr. Paul Adams has had the vision and foresight to have been able to go from the beginning all the way to the top, because we have at Herbert Morrison Technical grades 7 to 13. We need radical thinking and transformation and Mr. Adams has been a visionary and what we see now is an expansion of opportunities beyond grade 11. He has more students in grades 12 and 13,” the Minister said.

He added that the work of Mr. Adams and his team at Herbert Morrison has started the early positioning of the school to ensure that its students are ready to take advantage of opportunities which will come under the “fourth industrial revolution.”

What I have said in simple terms is that we want all our students now to have education extended to at least age 18. Herbert Morrison is very much in sync with the global trends for the fourth industrial revolution,” Senator Reid said.