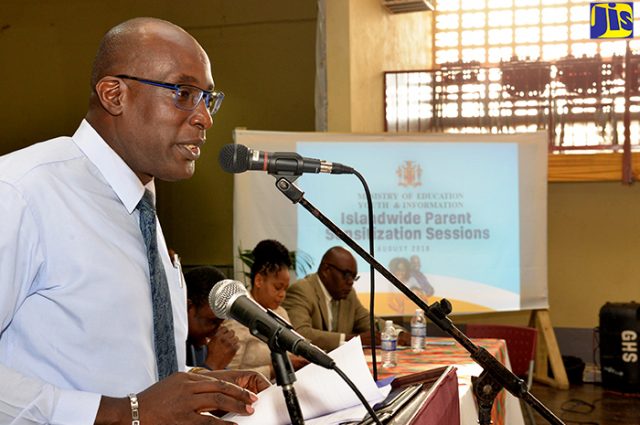 JIS: Some 1,007 cooks who prepare lunches for PATH beneficiaries are now being paid $323.8 million in salary directly from the Government, so that parents no longer have to worry about paying for their lunch.

Minister of Education, Youth and Information, Senator the Hon. Ruel Reid, said there was a 47 per cent increase in the 2017/18 budgetary allocation to the PATH programme, and with parents asked to pay $50 daily for the lunches for the students, the Government decided to take over the payment of cooks’ salaries, so parents who are poor no longer have to pay it.

Senator Reid was addressing parents and teachers who attended a Sensitisation and Consultation Session at Glenmuir High School in Clarendon on August 28.

“If the child is hungry, he won’t learn, and we don’t want them to stay away from school because they have no lunch money. There should be no embarrassment, victimisation or discrimination. The children will get lunch five days a week,” the Minister said.

Senator Reid told the parents that in high schools where a concessionaire provides lunch, PATH recipients will also get their lunches from them.

“There are some concessionaires with whom we have worked out a formula between them and the school as to how to use additional funding support, because, as a policy, we are saying to schools, all the children who are vulnerable and poor must be supported by the Government,” he said.

On transportation, the Minister cited studies that showed some 20 per cent of students being absent from school because of transportation difficulties.

He said that the Jamaica Urban Transit Company (JUTC), which now services some parts of St. Catherine, is highly subsidised, so the cost of transportation for parents in urban areas is much less than it is for those in rural Jamaica.

“We have built out capacity in 12 parishes, targeting the poorest of the poor, those who would not be able to send children to school because the bus fare is not there. We have given money to the school to contract private contractors to pick up your child from home, take them to school and back; so there is no excuse,” Senator Reid said.