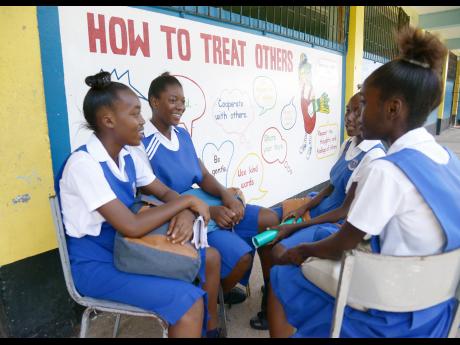 JIS: In light of recent reports of bullying among students and the traumatic impact on the victims, the Child Development Agency (CDA) is imploring parents to engage their children on a deeper level.

“It is important that parents have frequent dialogue with their children and ask the right questions,” advises marketing and public relations manager at the CDA, Rochelle Dixon.

Dixon said the agency had been getting calls from concerned parents and has executed a number of interventions in different institutions. She noted, however, that the victims may not necessarily reach out for assistance until the case becomes extremely severe.

She said that there are a number of telltale signs that parents may look for to determine whether something is amiss with the child.

“Your child may express a desire to stay away from school. There may be changes in the child’s mood and behaviour pattern. He or she may be apprehensive about discussing what happens in class, as well as other stress-induced symptoms may present themselves,” she explained.

A United Nations Children’s Fund (UNICEF)/CDA study conducted in 2015 found that six in 10 students report being bullied at some point in their lives, with the majority of cases occurring at school.

Dixon is encouraging parents to forge partnerships with the teachers and guidance counsellors at the schools their children attend and report incidents to the school’s administration. Additional support may also be had by reaching out to the CDA.

CAPTION: A United Nations Childrens Fund (UNICEF)/Child Development Agency study conducted in 2015, found that six in 10 students report being bullied at some point in their lives, with the majority of cases occurring at school.