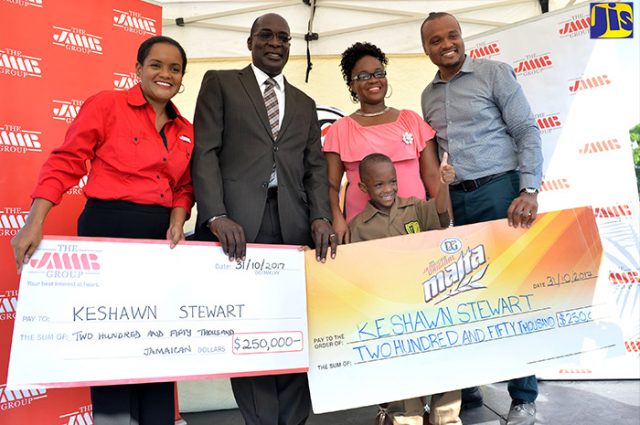 Speaking at the Malta Back to School Scratch and Win grand prize handover ceremony on October 31 at the St. Jude’s Primary School in Kingston, the Minister said this is important for the child to realise his or her future career aspirations.

Noting that the Ministry facilitates free education from early childhood up to the secondary-education level, Senator Reid encouraged parents to take advantage of this by saving for their child’s tertiary education.

“The cost for training and certification very often becomes challenging. The Government itself, while we provide free education up to grade 13, will not be able to fund everybody at the higher level.

I am appealing to parents to begin to prepare for their child’s tertiary-education programme. You have to save,” he emphasised.

Senator Reid further reiterated the Government’s commitment to providing assistance to students pursuing studies in the areas of science, technology, engineering and mathematics (STEM), through its mathematics, science and technical vocational scholarships, and encouraged the young students to work hard in these subject areas.

Keshawn’s mother, Keisha White, who entered the competition on her son’s behalf, will be assigned Trustee for the JMMB investment facility. The funds will only be accessible to Keshawn when he turns 18 and will be used to finance his tertiary education.

Ms. White, who submitted several entries in the competition, expressed her appreciation of the initiative, which she said will assist her son in realizing his dream of becoming a pilot in the Jamaica Defence Force (JDF).

“I feel very excited. It means a lot to me for when he goes to college, because it isn’t easy to find money for college. My son won’t have to go through that, because I entered this competition. It’s a very nice feeling,” she said.

The initiative, which is spearheaded by beverage giant, Malta, in collaboration with JMMB and Kingston Bookshop, has, so far, awarded more than $2,000,000 in cash and prizes in its Back-to-School promotion, for which entries were opened in July.

Among the list of other prizes are $5,000 cash for offsetting back-to-school expenses for 40 winners; book vouchers valued at $15,000 each awarded to 20 winners; brand-new Samsung tablets given to 20 winners and $50,000 cash towards school fees for 20 winners.

CAPTION: Minister of Education, Youth and Information, Senator the Hon. Ruel Reid (second left); Group Chief Marketing Officer for Jamaica Money Market Brokers (JMMB) Limited, Kerry-Ann Stimpson (left); and Assistant Brand Manager for Stouts and Malta, Nathan Nelts (right), hold cheques totalling $500,000 , which was presented to grand prize winner of the Malta Back to School Scratch and Win promotion, grade-one student of St. Jude’s Primary School, Keshawn Stewart (giving a thumbs up), during the handover ceremony on October 31 at the school in Kingston. Behind Keshawn is his mother, Keisha White.

The Project Finance Unit is responsible for the provision of financial and accounting services required for the efficient and effective execution of capital development projects, funded by the Government of Jamaica and Multilateral/Bilateral Agencies. The unit also process payments for...
read more