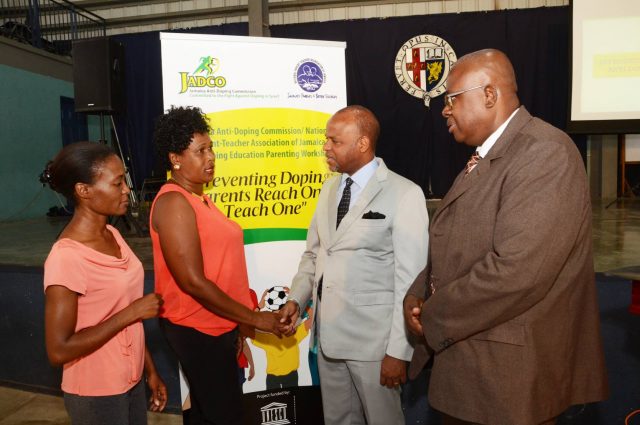 JIS: Parents are being encouraged to participate in the Jamaica Anti-Doping Commission’s (JADCO) public education programme, aimed at promoting fair play and integrity in sport.

This urging comes from Culture, Gender, Entertainment and Sport, Hon. Olivia Grange, who emphasised that “without the support of the parents, there can be no real impact made by the programme”.

Her remarks were made in a message delivered by JADCO Chairman, Alexander Williams, during the agency’s anti-doping parents education workshop at the Karl Hendrickson Auditorium, Jamaica College, St. Andrew, on Thursday, April 6, under the theme ‘Preventing Doping: Parents Reach One, Teach One’.

Ms Grange noted that the number of Jamaican students participating in various organised sporting events locally, regionally and globally has increased to well over 3,000.

Additionally, she said there were more than 40 registered sporting associations and disciplines, within and outside the school system, in which the youngsters participate.

This, the Minister contended, augured well for their holistic development, as, apart from the health benefits, the youngsters were afforded opportunities to secure scholarships as well as travel overseas and gain exposure to other cultures while learning important life skills.

Ms Grange said, however, that there was also the possibility of misplaced emphasis arising which placed focus on the “wrong things, like winning at all cost”.

“When athletes are exposed to the proper environment, whereby they can expend the necessary efforts and make good choices, you would be hard-pressed to find anything else that gives them the opportunity for holistic benefits than participating in competitive sports,” she added.

Against this background, Ms Grange lauded the support provided by the United Nations Educational, Scientific and Cultural Organization (UNESCO) in partnering with JADCO to host the workshops.

“Sincere gratitude must be expressed to UNESCO for its long-standing partnership with Jamaica, and specifically JADCO in its public education campaign (focused on) promoting fair play and integrity in sport,” she added.

The workshop, which was staged in partnership with the National Parent-Teacher Association of Jamaica, was geared towards sensitising parents and guardians of junior athletes about the anti-doping regulations.

Thursday’s staging was the first in a series of five scheduled to be held over the forthcoming weeks.

The Ministry of Education’s Research and Information Centre, a Special Library, is opened to staff, students and members of the public. It houses a collection of mainly educational resource materials such as texts, periodicals, theses and newspaper clippings.  It is...
read more