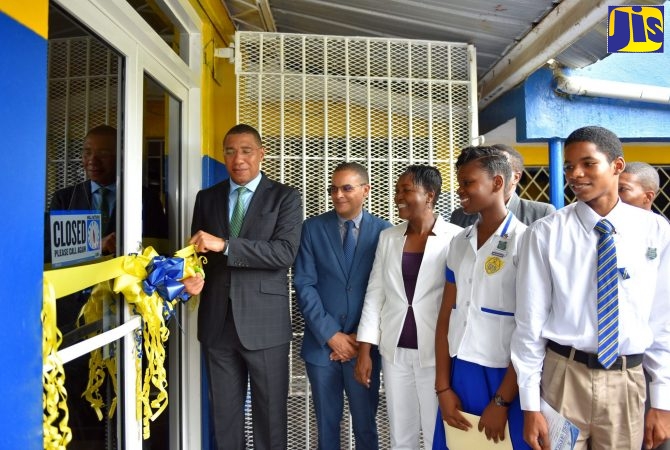 JIS: Prime Minister, the Most Hon. Andrew Holness, has given an undertaking to have programmed renovations at Penwood High School in West Central St. Andrew completed in short order.

Among the upgrades being targeted are improvements to the auditorium, staff room and general administrative facilities as well as the construction of additional classrooms.

Speaking at the official opening of Penwood High School’s new state-of-the-art information and communications technology (ICT) centre, on Friday (October 4), the Prime Minister said the Ministry of Education, Youth and Information has already scoped the project and is in possession of the designs and the plans.

“So, I am going to ensure that the programme is placed on a fast track. I see where we could actually start early next year,” the Prime Minister said.

Mr. Holness, who is the Member of Parliament for West Central St. Andrew, also indicated that he will seek to identify resources to support the Education Ministry’s programmed budget for the undertaking.

Meanwhile, the Prime Minister welcomed the opening of the centre, valued at approximately $12 million, which was established with support from the Overseas Examinations Commission and Education Ministry, among other key stakeholders.

The facility, according to Chairman of the school’s Board, Gregory Pullen, has been equipped with 42 new computers; audiovisual equipment; a 65-inch television; high-speed Internet and Wi-Fi; and is fully air-conditioned.

He said the 42 computers now bring the total available to the students to 82, following an initial 40, which were placed in the school’s first ICT centre.

“The provision of this new lab will help the students to further improve their computer and technology literacy skills. It will help them in the actual sitting of examinations because where we are moving to… is that not all exams are going to be paper-based,” the Prime Minister said.

“As we progress and the technology becomes more robust in this area, many of our exams will be sat online. So, the schools having these labs will be at an advantage, because they will be able to participate in those exams which are conducted online,” he added.

Mr. Holness said the new facility will also assist the students in their general education in the areas of research, computer technology, and document management and ICT courses.

“So, this is a good move and is one of the programmes that will help to ensure that whatever gaps exist are rapidly closed,” he said.