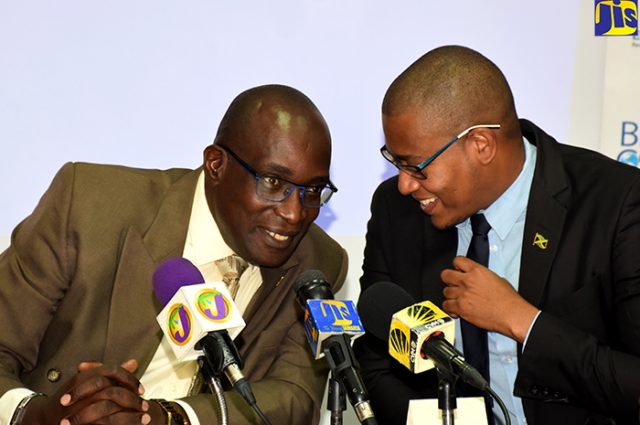 JIS: The Performance Task aspect of the Primary Exit Profile (PEP), previously scheduled for December, has been pushed back to March 2019.

The Ability Test and Curriculum-Based Test components will be conducted in February 2019 and April 2019, respectively, as previously scheduled.

Minister of Education, Youth and Information, Senator the Hon. Ruel Reid, made the disclosure during a press briefing at his offices in Kingston on Wednesday (October 3)“That will allow us to grade and provide scores and placement of our students on schedule for June 2019,” he said.

He informed that the change was based on the recommendation of the Jamaica Teachers’ Association (JTA) for an adjustment in the PEP schedule.

“The next round of discussions will be held with Board chairs and vice chairs, principals, vice principals and bursars, to make sure that at the leadership level they are all cognisant of what we are doing for PEP and other policies. This will then complete the circle of educators’ discussions with me,” he said.

Senator Reid said that coming out of consultations with other stakeholders, such as the National Parent-Teacher Association of Jamaica and the Book Industry of Jamaica, “other changes were taken on board in the best interest of the children”.

These include that students will have an option to choose for the Performance Task; teacher-engagement activity will be provided at least one month before the actual assessment is to be done; questions will be organised in such a way as to prevent students from having to flip the paper several times; a national committee will be formed to review test items; removal of teachers’ names from the individual students’ reports; and teachers will also be involved in the marking of papers and the development of test items.

“I am very pleased with the feedback and support we have been getting from all our stakeholders, and we intend to continue to listen and make adjustments where necessary and in keeping with the best interest of our children,” Senator Reid said.

He said that the Ministry will be continuing the weekend PEP camps for students, teachers and parents as well as teachers’ sensitisation sessions across the island.

He noted that over the last eight weeks, the Ministry has distributed a suite of materials to schools across the island, including practice items, registration manuals and sample test booklets.

“The final set of key resources will be the official practice booklets and answers for both teachers and students, for which distribution will begin this week,” he indicated.

Senator Reid noted that the PEP website should be fully operational by Friday of this week, adding that a PEP software application will be available in another two weeks.

Meanwhile, he said Performance Task mock results for grade five have been distributed to schools. The mock test was conducted in June to assess the readiness of students for PEP.

He said additional resources, such as specialist teachers, will be utilised to improve the results for Science.

“The mock showed that greater support will have to be provided for teachers in the areas of drawing conclusions and taking informed actions, as well as gathering and evaluating sources, which were two of the areas assessed in the mock exam,” he said.

He said the Ministry is pleased with the responses of the students and the effort that was made by teachers to understand and administer the assessment.

“The signs are encouraging, and we now have tangible data to move forward,” he said.

Senator Reid informed that the Ministry will continue to fine-tune the preparations for the administration of PEP, through extensive engagement with teachers, parents and other stakeholders.

CAPTION: Minister of Education, Youth and Information, Senator the Hon. Ruel Reid (left), engages with Minister of State, Hon. Floyd Green, just before the start of a press conference at the Ministry’s National Heroes Circle offices in Kingston on October 3.