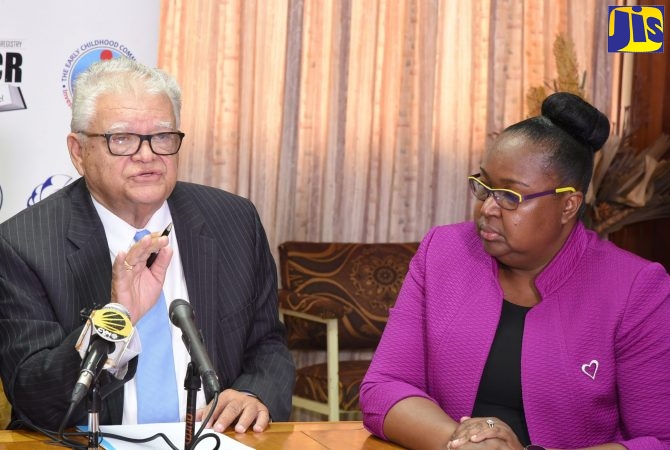 JIS: The Ministry of Education, Youth and Information has announced that the results for grade-six students who sat the inaugural Primary Exit Profile (PEP) examinations this academic year will be announced by the end of the third week in June.

Addressing a Press Conference at the Ministry on Tuesday (June 11), Minister with responsibility for the Ministry of Education, Youth and Information, Hon. Karl Samuda, said the Ministry is in the final stages of preparing the reports for release to the schools.

The Minister pointed out that a total number of 41,617 grade-six students sat the examination.

They were tested in three stages with a Performance Task Test on March 27 and 28, an Ability Test on February 26 and a Curriculum Based Test on April 16 and 17.

Mr. Samuda also announced that PEP scores will be reported using a scaled score, which allows for more accurate reporting on students’ performance.

He said parents will be provided with a Student Summary Report on the performance of their child when the results are released to the schools. This report will include the student’s scaled scores, placement, as well as an interpretation of the scores.

“We have moved away from reporting raw scores. It will allow for a more accurate reporting of a student’s performance. Similar to CSEC and CAPE, you will not see the percentages [of student grades]. Instead, parents will receive a detailed four-page report which clearly outlines your student’s performance,” the Minister explained.

“The shift in reporting is in keeping with regional and international best practices. The new reporting system will help schools and teachers to craft educational plans designed specifically for students. We are confident that this is a better system, which will benefit our students,” he added.

The PEP has replaced the Grade Six Achievement Test (GSAT) as the national secondary school entrance test. It is intended to provide a better and more complete profile of students’ academic and critical-thinking capabilities at the end of primary-level education.

CAPTION: Minister with responsibility for the Ministry of Education, Youth and Information, Hon Karl Samuda (left), addresses Press Conference on PEP at the Ministry in Kingston, on Tuesday (June 11). With the Minister is Permanent Secretary in the Ministry, Dr. Grace McLean.