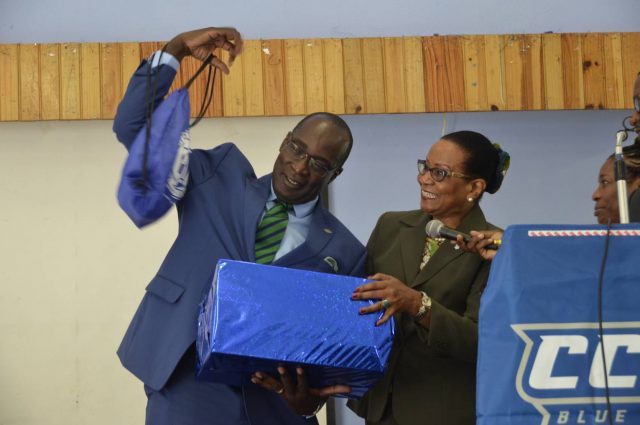 JIS: Minister of Education, Youth and Information, Senator the Hon. Ruel Reid, has called on teachers to incorporate physical activity and play into teaching at all levels of the primary and secondary school systems, in order to enhance students’ learning.

Speaking at the Central Connecticut State University (CCSU) Joint Alumni Professional Development Conference 2018, at the Sam Sharpe Teachers’ College in St. James on January 4, the Minister said engendering and promoting physical activity in the delivery of lessons, “inside the classroom and outside”, should be given prime consideration.

“Over the past decade, in study after study, in animals and people, exercise has been shown to improve the ability to learn and to remember. With our young people’s preference for computer games and a more sedentary lifestyle, obesity and lethargy have increased among the youth,” Mr. Reid noted.

“That is why we are encouraging more of our schools to look at having some form of physical activity at all levels. The tendency has been to make Physical Education (PE) optional after grade nine. We believe it should be mandatory up to grade 13. The aim is not primarily to force people but to encourage them to see the importance of a healthy diet and regular exercise to their overall well-being,” the Minister added.

He told the audience that the promotion of play and physical activities as part of the instruction process, ought to be undertaken in a manner that enables them to complement each other.

Mr. Reid said this could also be integrated into the assessment process. “There are activities which students can do based on the direction given to them by teachers that can form part of the assessment regime,” he added.

The Minister pointed out that teachers can use the concepts of running or walking long distances and the lifting of weights to teach basic math and science.

“When we help our children to make the link between the theory and the practical, real education would have taken place,” he said.

On the issue of nutrition in schools, Mr. Reid expressed concern about the saturated fats and high sugar content in foods being served in many places of learning.

He said that, as a consequence, the Ministry is currently in discussions with the Ministry of Health to develop a nutritional policy, which is expected to be made public in short order.

“Some scientists are also pointing to a direct link between high saturated fat intake and mental performance. Tests have shown that many items popular in school cafeterias, such as hamburgers, chicken nuggets, pizza and French fries actually lower students’ ability to stay awake and concentrate. A dramatic drop in energy due to digestion of heavy foods leaves kids feeling lethargic, irritable and unable to focus,” the Minister said.

“That is one of the reasons why we at the Ministry have proposed that schools reduce the sale of drinks that have high sugar content,” he added.

The conference was held under the theme ‘Sound Minds in Sound Bodies: Physical Fitness for Optimal Learning’.

It was organised by the Eastern and Western Alumni Chapters of the CCSU, the Jamaica Educator Development and Support Network and Sam Sharpe Teachers’ College.

CAPTION: Minister of Education, Youth and Information, Senator the Hon. Ruel Reid, demonstrates physical activity as he accepts a gift and gym bag from Dr. Jean Beaumont, following his address at a Professional Development Conference, which was staged by the Central Connecticut State University Joint Alumni at the Sam Sharpe Teachers’ College in St. James on January 4.