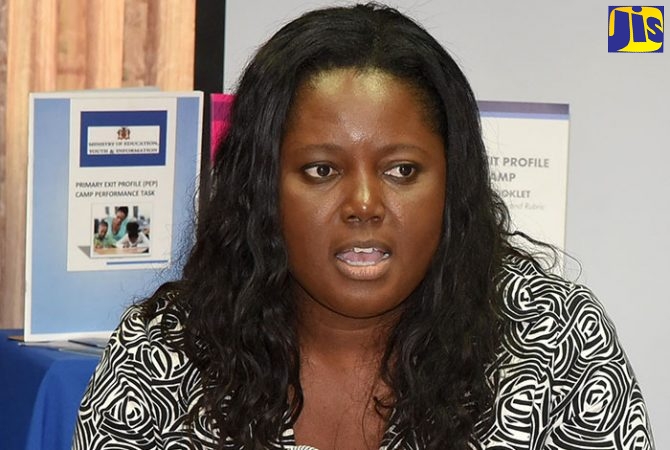 She gave the assurance at the Ministry’s Quarterly Press Conference, which was held in the downtown Kingston offices on Thursday (December 6).

“Students will be scored based on their raw scores received in the subjects Mathematics, Language Arts, Science and Social Studies. These raw scores will be transformed into Standard Scores and we will use the Standard Scores to derive Composite Scores, and based on the Composite Scores, students will be ranked from one right up to 45,000, because we have 45,000 students registered to sit the exam [in 2019],” Mrs. Thomas-Gayle said.

She explained that based on a ranking format, students will be placed in their schools of choice.

“The child who receives first place ranking will be given his/her first choice and then we move to the second ranked child, and they will be given their first choice. The placement mechanism is done using a computer algorithm, and it is not done by any individual. Actually, that is used to rank the students and subsequently places them into their schools of choice,” she explained.

“We now have a national committee in place for the implementation of the National Standards Curriculum and the administration of PEP. This committee has representatives from our major stakeholders,” she said.

She said teachers will be a part of the marking of Performance Task papers and they are invited to submit practice questions that will be reviewed, validated and placed on the PEP website.

PEP is the series of tests which has replaced GSAT as the national secondary school entrance examination. It is intended to provide a better and more complete profile of students’ academic and critical-thinking capabilities at the end of primary-level education. It comprises a Performance Task Test, Ability Task Test and a Curriculum-based Test.

CAPTION: Manager, Student Assessment Unit in the Ministry of Education, Youth and Information, Terry-Ann Thomas-Gayle, addresses the Ministry’s Quarterly Press Conference, which was held at the downtown Kingston offices on Thursday (December 6).