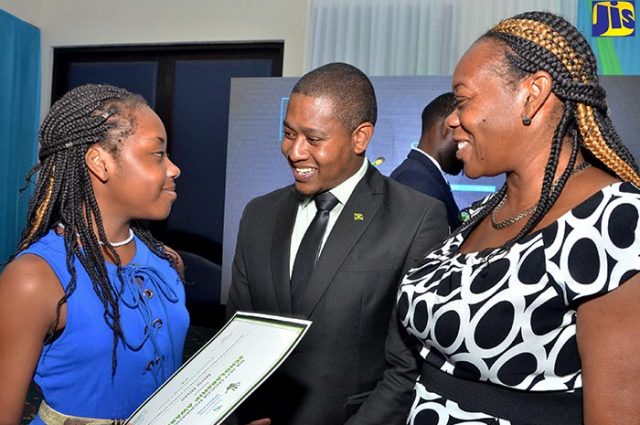 JIS: State Minister for Education, Youth and Information, Hon. Floyd Green, says plans are in an advanced stage for the creation of an all-island national mentorship scheme.

He noted that the plan involves a partnership with the National Security and Economic Growth and Job Creation Ministries.

The State Minister was speaking to JIS News at the third staging of the Sagicor Foundation Scholarship Awards ceremony, held at The Jamaica Pegasus hotel in New Kingston, on August 24.

Mr. Green informed that work to achieve the all-island national mentorship scheme has already started under the Housing, Opportunity, Production and Employment (HOPE) Programme, launched in May this year by Prime Minister, the Most Hon. Andrew Holness.

“We’re tapping into university students, recruiting them and getting them to sign up to start some training to become mentors,” he said.

The HOPE Programme is geared at improving the social prospects of Jamaicans, particularly the youth.

Mr. Green pointed out that an examination of the use of technology to make the mentorship scheme “more effective and wide-reaching” will also be done.

The State Minister indicated that, in short order, an outline for a holistic plan will be made available.

Meanwhile, in his remarks to recipients of the scholarships, Mr. Green urged tertiary students to mentor at least one child at the primary and secondary levels.

He also encouraged the secondary-level students to get involved in co-curricular activities.

To the parents and guardians, the State Minister urged continued support and guidance of all students.

“Parental support makes the difference. It is not just financial (support) but encouragement. That goes a far way. Continue to support the children and join the parent-teacher association (PTA),” he encouraged.

For his part, Managing Director of Crafton Holdings Limited and Lecturer at the Mona Campus of the University of the West Indies, Damion Crawford, commended the Education Ministry for its role in increasing the allocation per student at the primary level from $850 to $2,500.

“As a Sagicor scholar, you have a responsibility firstly to yourself to maintain being a top performer and to also ensure that you continue to serve as a shining example to future awardees,” he said.

Mr. Zacca asserted that the Sagicor Foundation will continue to play its part in supporting education, as it is the “passport to the future and to a better life”.

Sixty-eight scholarships were awarded by the Sagicor Foundation to 37 exceptional Grade Six Achievement Test (GSAT) recipients transitioning to secondary school and 31 students at the tertiary level.

Fourteen children of members of the Jamaica Defence Force (JDF) benefited from educational grants valued at $40,000 each for one year, and the remaining 23 GSAT scholarships are valued at $50,000 each for five years, renewed annually.

The tertiary scholarships are valued at $250,000 annually and are renewed for each academic year.