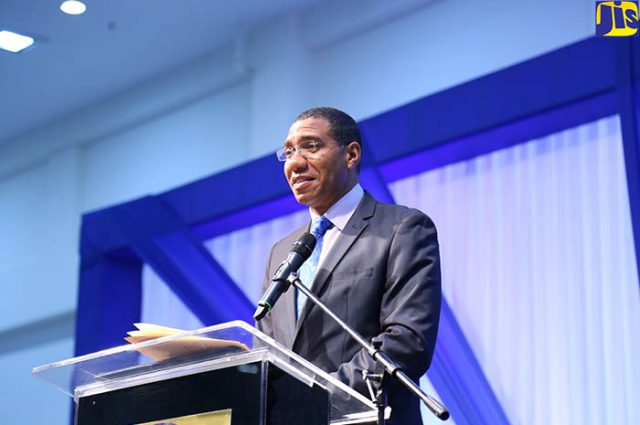 JIS: Prime Minister, the Most Hon. Andrew Holness, says he supports the concept of occupational degrees, where persons can reach that level as a butcher, a chef or as a cosmetologist.

He argued that the country has suffered over the years as a result of society’s prejudice towards jobs and occupations that were deemed inferior.

Addressing graduates of the Ministry of Education Career Advancement Programme (CAP) at the Montego Bay Convention Centre, St. James, on December 7, Mr. Holness said that many young persons have fallen by the wayside as a result, and that the Government now has to do something to bring them back into the mainstream.

“Previously, we did not consider these areas of vocational endeavours as occupation. The society didn’t accord the respect to these areas. So, our young people were exposed to only a very narrow range of what could be considered acceptable vocational or professional endeavours,” he added.

Mr. Holness said that what the society was actually doing was locking out “our young people” from the respect that a job gives them and forcing many to resort to wrongdoing.

“We, therefore, ended up with a situation where we would have young people who believed their only option was to sit on the roadside and dig a hole in their hand middle. I thought that was not acceptable, and that we have to do something in the education system to capture all those young people and give them an opportunity,” he said.

The Prime Minister noted that faced with such a stark reality, the Government went back to the drawing board and came up with the policy of compulsory education.

“It’s not compulsory in the sense where we are going to drag you off the road and lock you up in a school. That’s not what it means,” Mr. Holness said.

“What it means is that the Jamaican State must guarantee every single Jamaican citizen the opportunity to access high-quality education from their third birthday to their eighteenth birthday. We decided that we would put in place both the resources and the institutions to make this happen,” he explained.

The Prime Minister said the approach was to first look at the early-childhood institutions and to figure out how best to expand the Government’s “footprint” in the programme, ensuring that from the basic education age…”we would be giving our young people a good start”.

He noted that the results, so far, have been very encouraging, adding that at the primary level, ways must be found to end the situation where there is a high level of students leaving primary schools illiterate.

“Which is why we have launched a major programme around literacy. We nationalised the Grade Four literacy and Numeracy tests, and moved literacy from 56 per cent to where we have scores now from 85 to 90 per cent each year,” the Prime Minister pointed out.

Under the Career Advancement Programme, the Government provides additional educational and vocational training opportunities for secondary students, aged 16 to 18.