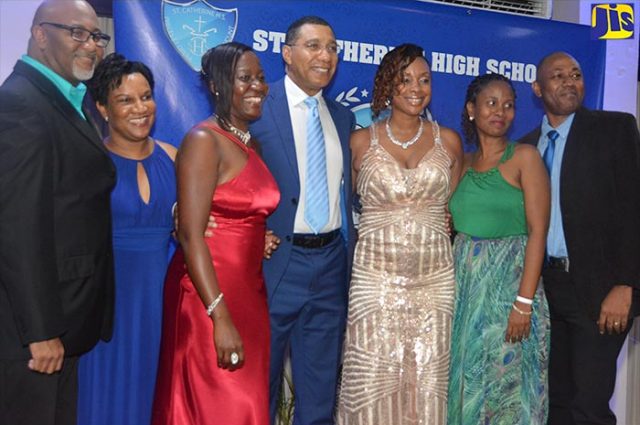 JIS: Prime Minister, the Most Hon. Andrew Holness, says the sixth-form option in high schools provides a unique opportunity for students to develop leadership qualities and should be encouraged.

Addressing the 30th Anniversary Banquet of the St. Catherine High School Class of 1988, at the Jewel Runaway Bay Beach and Golf Resort, Runaway Bay, St. Ann, on July 14, Mr. Holness said to this end, he is spearheading an effort to build a state-of-the-art sixth-form block at his alma mater (St. Catherine High), which will be used as a template for other high schools across the island.

“Sixth form was a particularly interesting and important experience for me. That’s where I developed most of my leadership skills and abilities. That’s where I got the grooming for leadership. I think sixth form is such a critical part of the school experience, now that more and more students are not just leaving school at fifth form,” he said.

The Prime Minister noted that in light of such widespread interest, it is now incumbent on the nation’s high schools to put the facilities in place to accommodate the demand.

Mr. Holness said that a team has already been assembled to start working on the design and that he expects that the (St. Catherine High) facility should be completed within 18 to 24 months.

“I visited the school on Labour Day (May 23), and we have settled on a location. It will be central between the junior and senior campus, and some funds have already been committed. While the timeframe is anywhere between 18 months and two years, it could well be earlier based on the interest being shown by many of our past students,” the Prime Minister said.

The Ministry of Education, under the guidance of portfolio Minister, Senator the Hon. Ruel Reid, has long been pushing for more schools to implement sixth-form programmes.

To that end, Senator Reid said the Government has implemented a textbook rental for sixth-form students in the coming school year, so as to offset cost for students who have opted to continue their high-school education, as opposed to moving on to college or taking a break from school.

“While sixth form can be an expensive venture, we would rather students remain in school as opposed to leaving and not having anything to do,” the Minister said in a recent interview.

“We feel that by implementing the textbook rental, we can give parents a much-needed break on the cost of having students moving on to sixth form,” Senator Reid added.

The Corporate Planning has as its responsibility coordinating the preparation and presentation of the annual Corporate Plan Report, collection and collation of reports and other necessary information for the quarterly corporate plan reports and monthly Performance Management review. The Unit...
read more