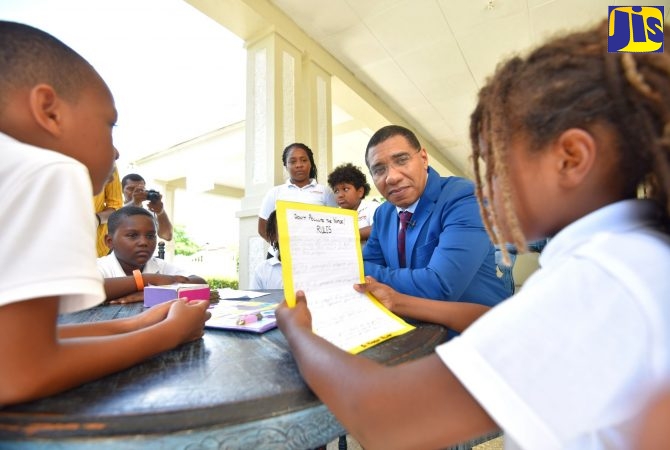 JIS: Students and staff of Fundaciones (El Centro) got a welcome treat on Thursday morning (June 6), when Prime Minister, the Most Hon. Andrew Holness stopped at the institution’s Hillcrest Avenue location in St. Andrew.

Mr. Holness visited the early childhood division, where he observed the delivery of instruction in English and Spanish at that level.

He played chess with the students, toured the school’s herb and vegetable garden, and read to the children from the book ‘The Very Hungry Caterpillar’ by Eric Carle.

Director, Fundaciones, Rachael McDonald, said the students and staff members were happy for the visit from the Prime Minister.

“Our children were very excited to show him some of what they are learning, some of what they have been doing, and, of course, to share whatever they want to share with him. We are also very thankful to have been able to speak a little bit about Spanish as a foreign language with him and have good dialogue about his views on this,” Ms. McDonald said.

With centres in Kingston and Montego Bay, Fundaciones delivers programmes and activities for children from 18 months to 18 years.

“Fundaciones is literally Spanish for foundations, and what we are giving kids at every level, in every programme, are the fundamentals that they need to learn in order to survive,” Ms. McDonald told JIS News.

The staff members also shared their teaching techniques with the Prime Minister, which incorporate the use of both English and Spanish languages in the classroom, and illustrated what other schools can do to model their example.

CAPTION ONE: Prime Minister, the Most Hon. Andrew Holness, listens as Fundaciones student, Makena Wilmot (right), reads the rules for the ‘Don’t Pullute the Water’ game designed by the students. Occasion was the Prime Minister’s visit to the institution on Hillcreast Avenue, St. Andrew, on Thursday (June 6).

CAPTION TWO: Prime Minister, the Most Hon. Andrew Holness (second right), engages with students at Fundaciones, before playing a game of chess with them. The Prime Minister visited the school on Hillcreast Avenue, St. Andrew, on Thursday (June 6).